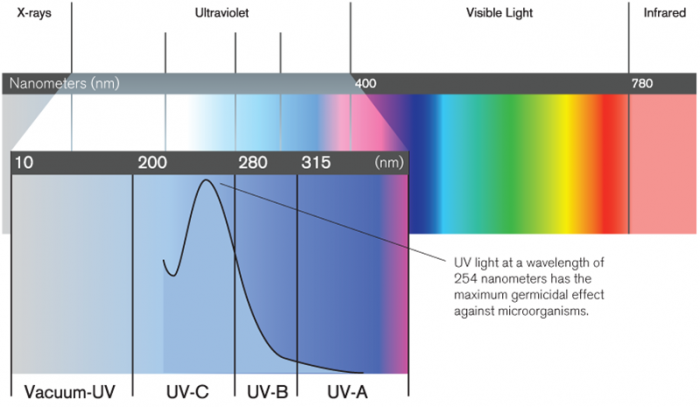 Although UV has other applications in water treatment, such as chloramine reduction, by far the most common use is for germicidal disinfection. As the picture illustrates, the standard UV dosage for germicidal treatment is 254 nanometers.

Although it’s taken a long time for the technology to become widely adopted, UV has been around for a long time. In 1877, the germicidal properties of sunlight were discovered and it was only a matter of time before people tried to apply this knowledge for practical use. In 1903, Niels Fensen received a Nobel Prize for his use of ultraviolet light to combat tuberculosis, and in 1910, the first drinking water disinfection system opened in Marseilles, France.

From that time, the technology changed very little until the 1930s, when the first tubular lamps were developed. The tubular lamp allowed for easier applications and different configurations for use. In the 1950s, the first truly significant research into UV disinfection began. By the 1960s, UV disinfection was becoming more widely used in commercial applications and was creeping into the residential market.

Today, ultraviolet disinfection is widely accepted as an effective treatment for the removal of microbiological contaminants from water. Although it was initially viewed as a treatment for un-chlorinated well water, the use of UV for city water residential applications is increasing rapidly. As the infrastructure that cities use to deliver water to customers deteriorates, point-of-entry UV is expected to become a standard feature in homes.

Even highly chlorine-resistant microbes such as Giardia and Cryptosporidium can be effectively eliminated from water with UV. UV systems are becoming an increasingly popular alternative to chemical treatment for many applications.