Here’s More Than You Might Want to Know About Shrimp

Shrimp’s Dirty Secrets: Why America’s Favorite Seafood Is a Health and Environmental Nightmare

In a Nutshell: America’s favorite seafood is both farmed and harvested; neither way works very well for the environment. Exactly how to eat shrimp “ethically” is not clear.  Shrimp is, furthermore, not a health food, not to mention that it’s a pretty gross thing to be swallowing.

Americans love their shrimp. It’s the most popular seafood in the country, but unfortunately much of the shrimp we eat are a cocktail of chemicals, harvested at the expense of one of the world’s productive ecosystems. Worse, guidelines for finding some kind of “sustainable shrimp” are so far nonexistent.

In his book, Bottomfeeder: How to Eat Ethically in a World of Vanishing Seafood, Taras Grescoe paints a repulsive picture of how shrimp are farmed in one region of India. The shrimp pond preparation begins with urea, superphosphate, and diesel, then progresses to the use of piscicides (fish-killing chemicals like chlorine and rotenone), pesticides and antibiotics (including some that are banned in the U.S.), and ends by treating the shrimp with sodium tripolyphosphate (a suspected neurotoxicant), Borax, and occasionally caustic soda.

Upon arrival in the U.S., few, if any, are inspected by the FDA, and when researchers have examined imported ready-to-eat shrimp, they found 162 separate species of bacteria with resistance to 10 different antibiotics. And yet, as of 2008, Americans are eating 4.1 pounds of shrimp apiece each year — significantly more than the 2.8 pounds per year we each ate of the second most popular seafood, canned tuna. But what are we actually eating without knowing it? And is it worth the price — both to our health and the environment? 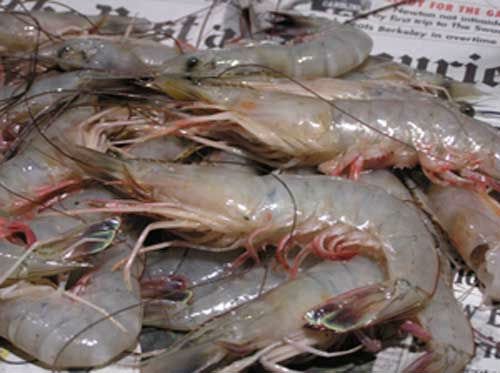 Shrimp rank way ahead of second-place tuna as America’s seafood choice. You might prefer not to know where it comes from.

Understanding the shrimp that supplies our nation’s voracious appetite is quite complex. Overall, the shrimp industry represents a dismantling of the marine ecosystem, piece by piece. Farming methods range from those described above to some that are more benign. Problems with irresponsible methods of farming don’t end at the “yuck” factor as shrimp farming is credited with destroying 38 percent of the world’s mangroves, some of the most diverse and productive ecosystems on earth. Mangroves sequester vast amounts of carbon and serve as valuable buffers against hurricanes and tsunamis. Some compare shrimp farming methods that demolish mangroves to slash-and-burn agriculture. A shrimp farmer will clear a section of mangroves and close it off to ensure that the shrimp cannot escape. Then the farmer relies on the tides to refresh the water, carrying shrimp excrement and disease out to sea. In this scenario, the entire mangrove ecosystem is destroyed and turned into a small dead zone for short-term gain. Even after the shrimp farm leaves, the mangroves do not come back.

A more responsible farming system involves closed, inland ponds that use their wastewater for agricultural irrigation instead of allowing it to pollute oceans or other waterways. According to the Monterey Bay Aquarium’s Seafood Watch program, when a farm has good disease management protocols, it does not need to use so many antibiotics or other chemicals.

Additionally, some shrimp are wild-caught, and while they aren’t raised in a chemical cocktail, the vast majority is caught using trawling, a highly destructive fishing method. Football field-sized nets are dragged along the ocean floor, scooping up and killing several pounds of marine life for every pound of shrimp they catch and demolishing the ocean floor ecosystem as they go. Where they don’t clear-cut coral reefs or other rich ocean floor habitats, they drag their nets through the mud, leaving plumes of sediment so large they are visible from outer space.

After trawling destroys an ocean floor, the ecosystem often cannot recover for decades, if not centuries or millennia. This is particularly significant because 98 percent of ocean life lives on or around the seabed. Depending on the fishery, the amount of bycatch (the term used for unwanted species scooped up and killed by trawlers) ranges from five to 20 pounds per pound of shrimp. These include sharks, rays, starfish, juvenile red snapper, sea turtles and more. While shrimp trawl fisheries only represent 2 percent of the global fish catch, they are responsible for over one-third of the world’s bycatch. Trawling is comparable to bulldozing an entire section of rainforest in order to catch one species of bird.

Given this disturbing picture, how can an American know how to find responsibly farmed or fished shrimp? Currently, it’s near impossible. Only 15 percent of our total shrimp consumption comes from the U.S. (both farmed and wild sources). The U.S. has good regulations on shrimp farming, so purchasing shrimp farmed in the U.S. is not a bad way to go. Wild shrimp, with a few exceptions, is typically obtained via trawling and should be avoided. The notable exceptions are spot prawns from British Columbia, caught in traps similar to those used for catching lobster, and the small salad shrimp like the Northern shrimp from the East Coast or pink shrimp from Oregon, both of which are certified as sustainable by the Marine Stewardship Council. However, neither are true substitutes for the large white and tiger shrimp American consumers are used to.

The remaining 85 percent came from other countries and about two-thirds of our imports are farmed with the balance caught in the wild, mostly via trawling. China is the world’s top shrimp producer — both farmed and wild — but only 2 percent of China’s shrimp are imported to the U.S. The world’s number two producer, Thailand, is our top foreign source of shrimp. Fully one third of the shrimp the U.S. imports comes from Thailand, and over 80 percent of those shrimp are farmed.

The next biggest sources of U.S. shrimp are Ecuador, Indonesia, China, Mexico, Vietnam, Malaysia and India. Together, those countries provide nearly 90 percent of America’s imported shrimp. Interestingly, Ecuador’s shrimp industry exists almost entirely to supply U.S. demand, with over 93 percent of its shrimp coming up north to the U.S. The vast majority of those shrimp (almost 90 percent) are farmed. Sadly, shrimp production is responsible for the destruction of 70 percent of Ecuador’s mangroves. Farming practices in other countries range from decent to awful, but there’s currently no real way for a consumer to tell whether shrimp from any particular country was farmed sustainably or not.

Geoff Shester, senior science manager of Monterey Bay’s Seafood Watch, says that ethical shrimp consumption is a chicken and egg problem. On one hand, the solution is for consumers to show demand for responsibly farmed and wild shrimp by eating it but on the other hand, ethical shrimp choices are not yet widely available. Seafood Watch is working with some of the largest seafood buyers in the U.S. to help them buy better shrimp, but it’s currently a major challenge.

The first challenge is that labeling and certification programs do not yet exist to identify which farmed shrimp meet sustainable production standards. The second challenge is that even when such programs are in place, the U.S. demand will likely greatly exceed their supply.

Shester’s advice to consumers right now is “only buy shrimp that you know comes from a sustainable source. If you can’t tell for sure, try something else from the Seafood Watch yellow or green lists.” Knowing that many will be unwilling to give up America’s favorite seafood, he advocates simply eating less of it and keeping an eye on future updates to the Seafood Watch guide to eating sustainable seafood.

Jill Richardson is the founder of the blog La Vida Locavore and a member of the Organic Consumers Association policy advisory board. She is the author of Recipe for America: Why Our Food System Is Broken and What We Can Do to Fix It..