Harper’s Findings: The Secrets of the Deep 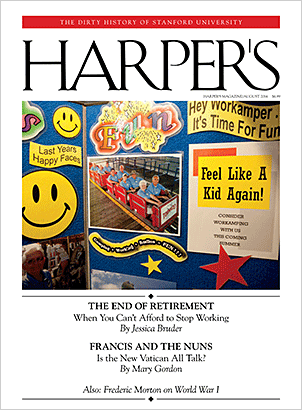 When this month’s Harper’s came to my mailbox I did what I always do.  I went straight to the last page, where the “Findings” feature reports, usually in one-sentence summaries and without references, the important things we humans have found out during the past month.  This month’s issue (August 2014) was particularly rich in water-related discoveries.  Here are some:

A goldfish piloted a fish tank on wheels with its thoughts.

Octopuses possess  a chemical that prevents self-sucking, and can differentiate other octopuses’ severed tentacles from their own, which they rarely eat.

Piscivory was reported among spiders on all continents save Antarctica, as was numeracy among blind cavefish, who live under the Somali desert. (The fish cannot, however, distinguish between successive integers, expressed in sticks.)

Anxiety in crayfish was induced by French scientists using both electric shocks and injections of serotonin, then relieved with injections of benzodiazepine.

The windshield wiper fluid of some Arizona school buses was found to contain Legionnaires’ disease.

The ferrous metals from which hatcheries are built confuse the magnetic sense of young steelhead.

In the Marshall Islands, rising seas were carrying away Japan’s war dead.