Gray-water systems catching on in Tucson

Visitors who come to this building to learn how such animals adapt to their surroundings, some by conserving water, may not know they are doing the same when they use the center’s sinks and water fountains.

In addition to cisterns that collect rain that hits the roof, channeling it to be used for irrigation, the center, which opened in 2008, features a gray-water system that sends water through underground pipes to water plants outside.

“It costs us a lot less, and the city a lot less, to use reclaimed water rather than potable,” he said.

Since 2008, Tucson has required plumbing in new homes to allow homeowners to set up gray-water systems to reuse water from bathroom sinks, showers and tubs as well as washing machines to water plants and lawns. Noting that a third of household wastewater typically can be reused as gray water, the city also offers a $1,000 rebate to homeowners installing permanent gray-water systems. 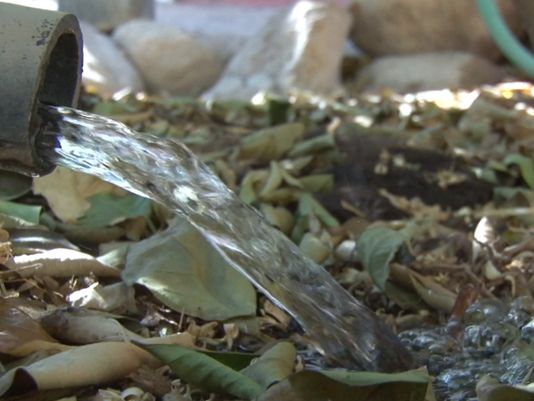 Since 2008, Tucson has required plumbing in new homes to allow homeowners to set up gray-water systems to reuse water from bathroom sinks, showers and tubs as well as washing machines to water plants and lawns.

Tucson Water has helped fund gray-water demonstration sites at the zoo as well as some businesses, social-service agencies and government offices.

Brad Lancaster, Tucson-based author of the book “Rainwater Harvesting for Drylands and Beyond,” said a gray-water system can reduce an average household’s water bill by 30 percent to 70 percent.

“If they redirected their gray water to the landscape instead of the sewer, they could meet easily over half of their landscape-irrigation needs just with the gray water,” he said.

Lancaster said that Tucson’s population and water consumption are growing but that its water resources are fixed.

“We need to become much more efficient and creative at how we reuse,” he said. “We need to recycle what we have multiple times and do it in the lowest-energy, highest-productive way.”

At his home in Tucson, Lancaster has a multipipe drain system, connected to his outdoor washing machine, that uses gravity to send the water down to his citrus trees. He also has a branched gray-water system that sends water from his bathroom sink and shower outside for irrigation. At any point, he is able to turn a valve and the water is redirected to the sewer.

Vice Mayor Paul Cunningham said Tucson changed its gray-water regulations a year and a half ago because so few people were installing systems. The city added the rebate and removed a requirement that homeowners obtain permits. Instead of permits, the city requires homeowners to follow a list of best management practices established by the Arizona Department of Environmental Quality.

“I feel Tucson’s long-term sustainability is incumbent on its ability to preserve water,” Cunningham said.

David Arthur Sampson, senior sustainability scientist at Arizona State University’s Global Institute of Sustainability, researched gray water through simulations in 2012 and found that an average household can save 18 to 35 gallons per day by using a gray-water system.

“If you count just the water that’s coming out of washing clothes, showers and baths, that can be almost 80 percent of the water you use in your house,” he said. “If you were able to use that water for irrigation, that would provide a substantial amount of water savings.”

Sampson said gray water hasn’t caught on in the Phoenix area like it has in Tucson, in large part because water rates generally are lower in the Valley.

“Water is too cheap right now,” he said.

The gray-water system at Reid Park Zoo’s Conservation Learning Center complements a catchment system through which rain that hits the roof is used in its toilets, reducing the use of potable water inside by about half. Both systems tie into the zoo’s overall conservation efforts, said Vivian VanPeenen, a zoo spokeswoman.

“The practice of conserving water and other natural resources is definitely effective for the zoo and the species we care for,” she said.