Gray Water May Be Coming of Age, But Maybe Not

A Gray Water System Can Save Water, But It Can Also Be A Lot of Trouble–A Lot More Than Simple Conservation

There was a time when talk of collecting and reusing “gray water” was strictly the province of hippies and readers of the Mother Earth News. With the increasing scarcity of water, we now hear more about it from a wider spectrum of the population. 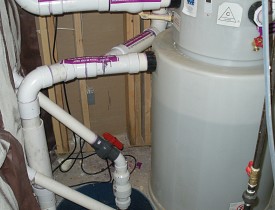 In general, gray water refers to water that goes down the drains of bathroom sinks, showers, tubs, and clothes washers. Black water, by contrast, is the waste from kitchen sinks, dishwashers, and toilets.

The point is, reuse of gray water is limited.  It also requires significant plumbing modification on existing homes. (It is much easier to arrange when a new home is being built.)  Maintenance requirements can also be significant.

While gray water use can save water, much more can be saved by landscaping for low water requirements.

The Gazette’s opinion is that the first step in really progressive water management in the home is tossing out the 1950s notion that your moral obligation as an American is to grow and mow as much grass as possible.

More About the Pros and Cons of Gray Water