Golf Courses Are Getting Browner!

Gazette Introductory Note: This article is really good news. If golfers can learn to play on courses that aren’t lush green, so too, perhaps, can footballers,  baseballers, and soccer players.  After that maybe people can learn to hold a backyard barbeque on a lawn that’s brownish or take their kids to play in a city park where the color of the grass reflects the season and recent weather conditions. When you think of it,  having golf courses and cemeteries that are eternally green is like living in a bubble. Life is richer when you experience change, and you don’t really appreciate green grass unless it’s sometimes brown.–Hardly Waite.

You know that climate change is scaring people when no less an authority than Golf Digest says, “The new reality for American golf is that water is far too precious to be squandered on golf courses.” 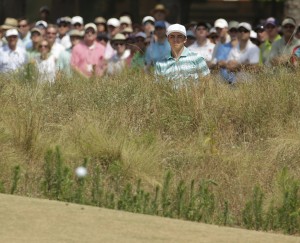 Pasatiempo Golf Club is located in Santa Cruz, Calif., which is going through an extended drought; mandatory water restrictions have shut off irrigation on at least the first 75 yards of each fairway, and roughs are yellowed and thin. “Pace of play has improved because there’s little time spent looking for balls in high rough,” Whitten writes.

More impressive is Pinehurst No. 2, in North Carolina, which has cut its water consumption from 55 million gallons in 2009 to 15 million this year. When it hosted the men’s and women’s U.S. Open championships in June, television viewers saw fairways that were yellowish or even brown instead of green, lined with “vast stretches of exposed sand.”