In a Nutshell:  Leading water researchers meeting in Bonn issued a severe warning that unless current trends are reversed severe water shortages will affect “most of the 9 billion people on Earth” within just one or two generations.

Washington: Leading water scientists have issued a warning that in the short span of one or two generations, most of the 9 billion people on Earth will be suffering from fresh water woes if any major reforms are not made.They said that this handicap will be self-inflicted and is entirely avoidable. 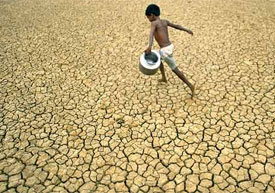 The researchers bluntly pointed to chronic underlying problems led by mismanagement and sent a prescription to policy makers in a 1,000-word declaration issued at the end of a four-day meeting in Bonn, Germany, ‘Water in the Anthropocene,’ organized by the Global Water SystemAfter years of observations and a decade of integrative research convened under the Earth System Science Partnership (ESSP) and other initiatives, they said that they are more than ever convinced that fresh water systems across the planet are in a precarious state.Mismanagement, overuse and climate change pose long-term threats to human well-being, and evaluating and responding to those threats constitutes a major challenge to water researchers and managers alike.Countless millions of individual local human actions add up and reverberate into larger regional, continental and global changes that have drastically changed water flows and storage, impaired water quality, and damaged aquatic ecosystems.  Humans are a key feature of the global water system, influencing prodigious quantities of water: stored in reservoirs, taken from rivers and groundwater and lost in various ways.

Additional deterioration through pollution, now detectable on a global scale, further limits an already-stressed resource base, and negatively affects the health of aquatic life forms and human beings.

Given the development imperatives associated with all natural resources at the dawn of the 21st century, we urge a united front to form a strategic partnership of scientists, public stakeholders, decision-makers and the private sector.