Genetically Engineered Salmon Is Being Rushed to Market

Why Is the FDA in Such a Hurry to Approve the Sale and Consumption of Frankenfish?

The following statement from the Cornucopia Institute questions the wisdom of the FDA’s rush to allow genetically engineer salmon to be raised and sold in the US.

Despite overwhelming opposition from citizens and public interest groups to genetically engineered (GE) food, including 400,000 public comments opposing GE salmon, the Food and Drug Administration (FDA) announced December 26, 2012 that it is prepared to give transgenic salmon its final stamp of approval.

The FDA failed to address serious concerns about the safety of consuming salmon that has been genetically engineered to produce growth hormones at all times, allowing it to grow faster and bigger than natural salmon. The FDA has not conducted any safety testing, and merely assumes that the genetically engineered salmon is safe to eat.

The FDA has also not considered the potential ecological and economic impacts of approving genetically engineered salmon. Salmon is an integral part of the ecosystem, and the accidental escape of genetically engineered salmon could devastate populations of native salmon, as well as the fish and marine mammals that depend on salmon for their food. Scientists have predicted that escaped GE salmon would likely wipe out wild salmon populations, which will destroy the livelihood of coastal communities that depend on fishing.

Despite the fact that the vast majority of Americans do not want to eat genetically modified organisms, this salmon will not be labeled as such. Yet the Obama administration is willing to gamble with our health for the financial benefit of one biotechnology company. 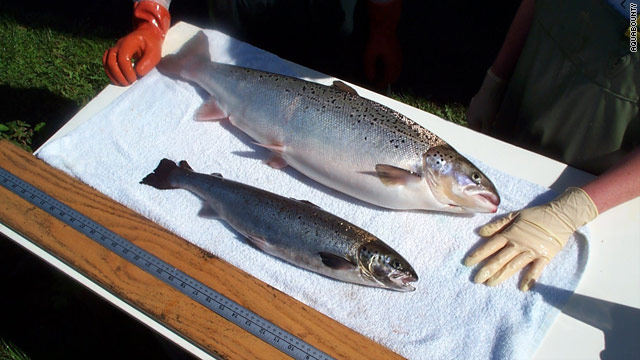 Which of these fish has had its DNA genetically altered? If you guessed the smaller one, you’re wrong. The DNA of the top fish has been genetically engineered to produce growth hormones all the time for its entire life. People who eat this fish will be eating this DNA, along with the growth hormones.

US citizens have the opportunity to comment to the FDA, expressing support or opposition to genetically engineered salmon.