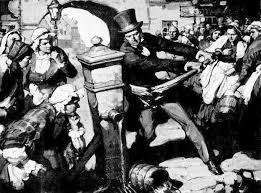 Waterborne diseases like infectious hepatitis,  bacterial dysentery, cholera, and giardiasis were common until fairly recently.  Throughout the world, health impacts were staggering. Entire villages in Europe were wiped out by plagues in the 11th and 12th centuries.   In 1848 and 1849 in a single cholera epidemic alone, 53,000 people died in London.

In 1854 Dr. John Snow, a London obstetrician, carefully plotted the locations of the illness and compared his findings to the subscriber lists of two private companies that provided water for London. His research showed that cholera occurred with greater frequency among the customers of one of the companies–the one that drew its water from the lower Thames river which was contaminated by London sewage. The other company used upper Thames water, which was less polluted.

Dr. Snow’s maps indicated a strong correlation between cholera cases and the proximity to the intersection of Cambridge and Broad Streets. The obvious conclusion was that the main cause of the cholera epidemic was the water drawn from a community pump on Broad Street.

The picture above depicts Dr. Snow removing the handle from the Broad St. pump. Below, an artist’s rendition of the deadly pump before Dr. Snow’s discovery.   For more details. 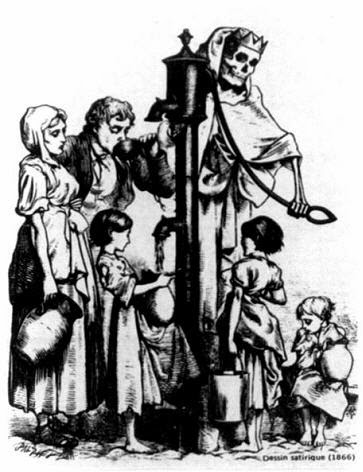