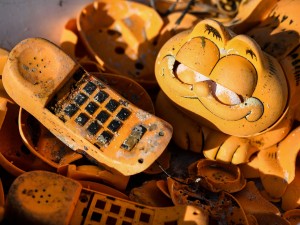 Since the 1980s pieces and parts of a bright orange novelty telephone depicting the cartoon cat Garfield have been appearing on beaches in Brittany in France. Not just an occasional phone.  A lot of them.

Until early 2019 the origin of these phones was a mystery. According to the BBC, the mystery was finally solved when a lost shipping container filled with Garfield phones “in a more complete condition than any found before them,” was discovered in a secluded sea cave accessible only during low tide. Unfortunately, the location of the lost shipping container makes recovery virtually impossible, so the Garfield phones are expected to continue to land on Brittany’s shores for years to come. Locals apparently are sick of picking them up. The seemingly endless supply illustrates how many small objects can be crammed into a single cargo container.

Incidents like the Garfield phone event have contributed to the belief that lost shipping containers are a major cause of ocean pollution.

Most of the time there are about 6,000 container ships active on the world’s seas and waterways to facilitate global trade. Lost containers represent only about one thousandth of 1 percent of the roughly 130 million container loads shipped each year, according to the World Shipping Council (WSC), which publishes results of a member survey every three years. According to the WSC:

For its 2017 report, the latest available, WSC gathered data for 2014-2016. The average annual number of containers lost at sea, excluding catastrophic events, was 612 during the period. That number is down about 16 percent compared to the average of 733 units lost each year for the previous three-year period. When catastrophic losses are included, defined as 50 or more containers in a single incident, the total number of containers lost at sea averaged 1,390 annually for the most recent period. That’s still a 48 percent reduction from the average annual losses of 2,683 estimated during the previous three-year period.

By comparison, an estimated 8 million metric tons of plastic pollution — a substantial amount from single-use plastic bottles and grocery sacks — finds its way into the oceans each year.

Clearly, though a thousand plus gigantic shipping containers lost at sea annually can spew out a lot of weird telephones and other assorted debris, the amount of  garbage they dump into the seas seems small when compared with the ongoing rivers of plastic put forth daily by everyday human activities. 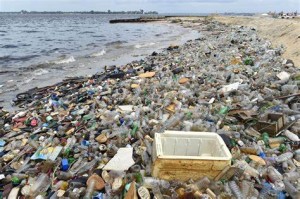 This plastic is not from a lost ship container but from humans going about their daily business.