Fluoride: An Issue that Never Goes Away

In lots of important ways,  the United States leads the civilized world at being backward.

Although we somehow worked our way past witch burning, we’ve had trouble keeping up with the rest of the civilized world on issues like capital punishment, dealing with drugs, providing medical care for our citizens, and figuring out the metric system.  And when you look at the fact that we’re still, in 2012,  intentionally putting a powerful systemic poison into our drinking water, it makes you wonder how we ever got past the fear of witches.

Fully 97% of modern western Europeans have reached the conclusion that putting fluoride into the water supply is a bad idea.  Nevertheless, fluoridation is still practiced in most parts of the USA.  What’s surprising is that a large portion of Americans  haven’t even heard that there might be something a little strange about adding the toxic waste products of aluminum and fertilizer plants to the public water supply.

Since the idea of selling municipalities toxic industrial waste as a way to prevent dental cavities first popped into the entrepreneurial brain in the middle of the past century, there’s been a battle going on, though most Americans seem blissfully unaware of it. 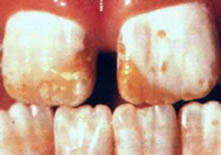 Fluoridation became an official policy of the United States Public Health Service by 1951, and by 1960 water fluoridation had become widely used in the U.S., reaching about 50 million people. By 2006, almost 70% of the U.S. population on public water systems were receiving fluoridated water.During this period there has been strong opposition to fluoridation but also strong and well-financed support for it.  The aluminum and phosphate fertilizer industries, the chief financial beneficiaries of fluoridation, have been enthusiastic supporters, as has the American Dental Association. The fluoride industry contributes $50 million per year to efforts to influence the public to adopt fluoridation in California alone. (It also contributes to the American Dental Association.) Well financed proponents of water fluoridation have been successful at dominating local fluoride elections, often by painting opponents of fluoridation as Luddite crazies, enemies of progress, the American flag, and cavity-free teeth. (See Paul Carpenter’s excellent piece, “Once Again the Kooks Are Vanquished,” on the Pure Water Gazette’s website.)

The conventional water treatment industry has remained predictably neutral on public fluoridation over the years,  being content to sell products to remove an intentionally added contaminant.  Professional associations take no position on the issue and hardly seem to notice its existence. In many ways fluoridation is government welfare for the water treatment industry.

More information about dental treatments that result from fluoridation.