It is not news that sea levels are expected to rise as global warming melts ice and causes water to expand.  It is not unusual that the rise in sea level is not uniform worldwide as factors such a water temperature and ocean currents come into play.

Nevertheless, the rate of sea level rise on the U.S. East Coast is surprising.  In parts of the East Coast, the level of the sea is rising at three to four times the average global rate.  The area in question is roughly from Cape Hatteras, NC to the Boston area.  In this area the level of the sea climbed at the rate of 2 to almost 4 millimeters per year between 1950 and 2009.  Global average sea level rise was about 0.6 to 1 millimeter during the same period. 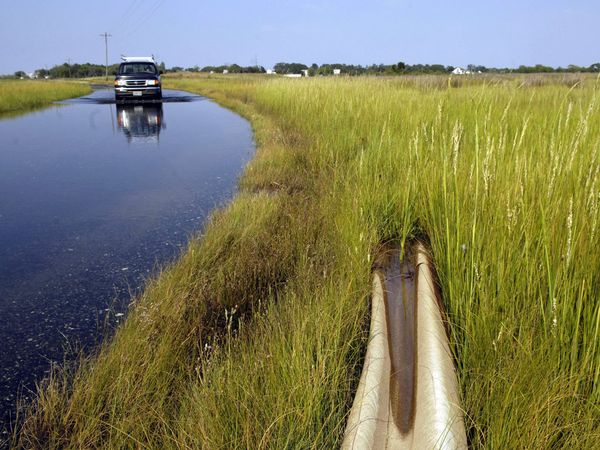 Smith Island, Maryland is on borrowed time. Less than 2 feet (0.6 meters) above sea level and sinking by the day, this tiny crabbing village will likely be among the world’s first inhabited islands to be lost. (Photo from National Geographic.)

The situation puts cities such as Boston, Philadelphia, Baltimore, and New York at much higher risk of flooding.

In these areas gradual sea level rise could cause rapid retreat of shoreline and significant loss of wetland habitats. Also to be expected are more frequent floods.

The cause of the exceptionally rapid sea level rise on the East Coast is debatable.  Some say that fresh water from Greenland’s melting ice is disrupting North Atlantic currents, slowing the Gulf Stream and causing East Coast sea levels to rise.  It is also argued that the rise is part of a 100 to 200 year natural cycle.

The Gazette does not believe, as some have asserted,  that the rise in waters is related to gay marriage rates. Nor do we believe that North Carolina laws requiring that future state sea level forecasts be based on only past patterns will cause Mother Nature to reverse her course.