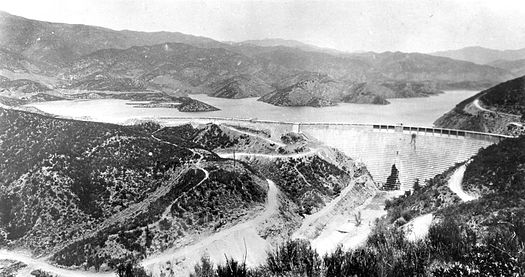 The ill-fated St. Francis Dam, shown above, became one of the largest but least discussed man made tragedies in US History when it burst in 1928, killing some 450 people.

The St. Francis Dam was a curved concrete gravity dam, built to create a large regulating and storage reservoir for the City of Los Angeles. The reservoir was an integral part of the city’s Los Angeles Aqueduct water supply infrastructure. It was located in San Francisquito Canyon of the Sierra Pelona Mountains, about 40 miles (64 km) northwest of Downtown Los Angeles, and approximately 10 miles (16 km) north of the present day city of Santa Clarita.

The dam was designed and built between 1924 and 1926 by the Los Angeles Department of Water and Power, then named the Bureau of Water Works and Supply. The department was under the direction of its General Manager and Chief Engineer, William Mulholland.

At 11:57 PM on March 12, 1928, the dam catastrophically failed, and the resulting flood took the lives of as many as 431 people. The collapse of the St. Francis Dam is considered to be one of the worst American civil engineering disasters of the 20th century and remains the second-greatest loss of life in California’s history, after the1906 San Francisco earthquake and fire. The disaster marked the end of Mulholland’s career. 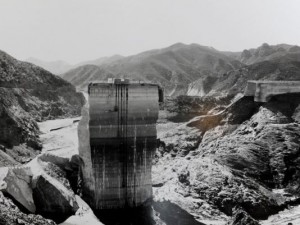 St. Francis Dam, after the deluge.