The US EPA announced it 2012 “WaterSense Partners of the Year for 2012” awards in early October. 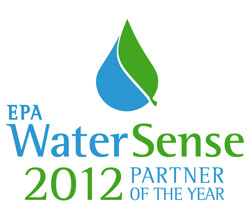 WaterSense is an ambitious program planned and carried out by the EPA that is aimed at saving water.

The 2012 Partners of the Year represent the best of WaterSense’s partners.  They are recognized for efforts made to increase water efficiency and awareness of the WaterSense program and its objectives.

And the winners are…

Kohler Co., now a three-time WaterSense Manufacturer Partner of the Year, introduced its most water-efficient dual-flush toilet in 2011. Kohler also more than doubled the number of WaterSense-labeled showerheads it offers and supported and participated in the “Wasting Water Is Weird” consumer education campaign to promote water conservation.

Retailer Partner of the Year:
Lowe’s Companies, Inc. became a three-time WaterSense Retailer Partner of the Year by supporting and participating in the “Wasting Water Is Weird” campaign to promote water conservation and training their sales associates on water savings and usability of WaterSense labeled products. Through their efforts, Lowe’s customers saved about 4 billion gallons of water in 2011 with WaterSense products.

For full details of the accomplishments of the winners above and other businesses and organizations that were also recognized by the EPA, read the EPA’s press release.

Learn more about the WaterSense Awards Program, including information about past winners.