Environmental and Health Consequences of America’s Obsession with Bottled Water

Bottled Water Is a Symptom of Deeper Issues in Our Society

In A Nutshell:  Berkeley scientist Peter Gleick‘s new book, Bottled and Sold: The Story Behind Our Obsession with Bottled Water, examines bottled water as a symptom of  broader social issues like the decline in quality of our public water supplies, our naive susceptibility to marketing, and our acceptance of the throw-away mentality. Americans now drink more bottled water than milk or beer, and tap water is rapidly losing ground as the water of choice. The review below is excerpted from  Mal Warwick’s Blog on Books.

Put down that bottle of water, please, take a deep breath, and listen up. It’ll only take a few minutes, and when I’m done, you may never pick up a bottle of water again.

“Bottled water? This is a problem?” Yes, to Berkeley scientist Peter Gleick, co-founder and president of the world-renowned Pacific Institute, “bottled water is a symptom of a larger set of issues: the long-term decay of our public water systems, inequitable access to safe water around the world, our susceptibility to advertising and marketing, and a society trained from birth to buy, consume, and throw away. . . Suburban shoppers in America lug cases of plastic water bottle from the grocery store back to homes supplied with unlimited piped potable water in a sad and unintentional parody of the labor of girls and women in Africa, who spend countless backbreaking hours carrying containers of filthy water from distant contaminated sources to homes with no water at all.” 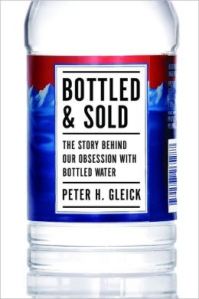 Bottling water on a large scale is a relatively new phenomenon. “In the late 1970s,” Gleick writes, “around 350 million gallons of bottled water were sold in the United States — almost entirely sparkling mineral water and large bottles to supply office water coolers. . . In 2008, nearly 9 billion gallons of bottled water were packaged and sold in the United States and five times this amount was sold around the world.” That’s a 25-fold increase in three decades, and “Americans now drink more bottled water than milk or beer.” (Betcha didn’t know that, did you? I sure didn’t!) Now, “data on beverage consumption reveals that on average, each of us is actually drinking around 36 gallons per year less tap water.”

Gleick notes that “when we do actually look, we find evidence that there are potentially serious quality problems with bottled water. . . [However], [t]he system for testing and monitoring the quality of bottled water is so flawed that we simply have no comprehensive assessment of actual bottled water quality.”

So, why hasn’t somebody done something about this? It turns out that the FDA is the culprit. Bottled water falls within the FDA’s purview. Gleick cites a study by the Government Accountability Office to the effect that “while the FDA does very few actual inspections of water bottlers, the few they conducted between 2000 and 2008 found problems a remarkable 35 percent of the time. Even this warning sign led to ‘little enforcement action.’”

Here, then, are the Top Ten Reasons Not to Drink Bottled Water:

9. The quality of tap water is rigorously regulated, and bottled water’s isn’t.

8. Discarded plastic water bottles end up in landfills or on roadsides by the billions. For example, “Berkeley (population 114,000) sends around six tons of PET [the plastic used in water bottles] a week to plastics recyclers — much of it used water bottles.”

7. Large scale water-bottlers sometimes drain aquifers and cause wells to run dry in communities where their plants are located.

6. Large corporations such as Nestle (Pure Life), Coca-Cola (Dasani), and PepsiCo (Aquafina) own the major bottled water brands and suck in massive profits, making them even larger.

5. Most bottled waters are marketed in a misleading way. For examples, “Yosemite” brand water is actually municipal tap water from Los Angeles.

4. “Making the plastic for a liter bottle of water actually takes three or four more liters of water itself.”

3. If you live in California “and buy Fiji Water, the energy cost of transporting the water to you is equal to the energy embodied in the plastic bottle itself.” If it’s Evian water instead, the energy expended is even greater.

2. The total energy cost of bottled water, including the materials used, the production process, and the transportation, “is a thousand times larger than the energy required to procure, process, treat, and deliver tap water.”

1. Smart restaurateurs like Alice Waters are starting to ban bottled water on their tables. And who are you going to believe if you won’t believe Alice?