The article that we’re reprinting below underlines the plight of many of the nation’s poorest residents who live in communities so small that they fall beneath the regulatory radar of agencies who set and monitor water quality standards for larger communities.  This sad situation  is particularly true in farming communities where decades of overuse of pesticides and fertilizers have now contaminated local wells and surface waters without provisions for cleanup.

The Problem Is Clear: The Water Is Filthy

Reprinted from the New York Times.

SEVILLE, Calif. – Like most children, the students at Stone Corral Elementary School here rejoice when the bell rings for recess and delight in christening a classroom pet.

But while growing up in this impoverished agricultural community of numbered roads and lush citrus orchards, young people have learned a harsh life lesson: “No tomes el agua!” – “Don’t drink the water!”

Seville, with a population of about 300, is one of dozens of predominantly Latino unincorporated communities in the Central Valley plagued for decades by contaminated drinking water. It is the grim result of more than half a century in which chemical fertilizers, animal wastes, pesticides and other substances have infiltrated aquifers, seeping into the groundwater and eventually into the tap. An estimated 20 percent of small public water systems in Tulare County are unable to meet safe nitrate levels, according to a United Nations representative. 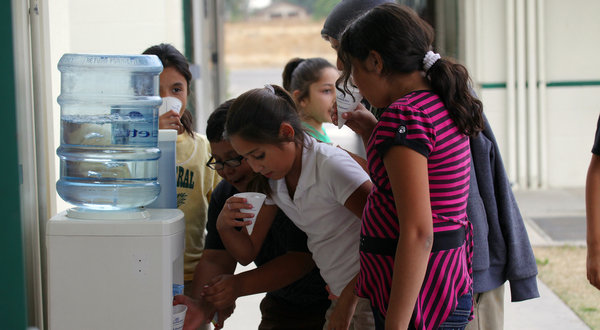 Students at Stone Corral Elementary in Seville, Calif. The school budgets $100 to $500 a month for bottled water. Local water has been polluted by years of unregulated agriculture.

In farmworker communities like Seville, a place of rusty rural mailboxes and backyard roosters where the average yearly income is $14,000, residents like Rebecca Quintana pay double for water: for the tap water they use to shower and wash clothes, and for the five-gallon bottles they must buy weekly for drinking, cooking and brushing their teeth.

It is a life teeming with worry: about children accidentally sipping contaminated water while cooling off with a garden hose, about not having enough clean water for an elderly parent’s medications, about finding a rock while cleaning the feeding tube of a severely disabled daughter, as Lorie Nieto did. She vowed never to use tap water again.

Chris Kemper, the school’s principal, budgets $100 to $500 a month for bottled water. He recalled his astonishment, upon his arrival four years ago, at encountering the “ghost” drinking fountains, shut off to protect students from “weird foggyish water,” as one sixth grader, Jacob Cabrera, put it. Mr. Kemper said he associated such conditions with third world countries. “I always picture it as a laptop a month for the school,” he said of the added cost of water.

Here in Tulare County, one of the country’s leading dairy producers, where animal waste lagoons penetrate the air and soil, most residents rely on groundwater as the source for drinking water. A study by the University of California, Davis, this year estimated that 254,000 people in the Tulare Basin and Salinas Valley, prime agricultural regions with about 2.6 million residents, were at risk for nitrate contamination of their drinking water. Nitrates have been linked to thyroid disease and make infants susceptible to “blue baby syndrome,” a potentially fatal condition that interferes with the blood’s capacity to carry oxygen.

Communities like Seville, where corroded piping runs through a murky irrigation ditch and into a solitary well, are particularly vulnerable to nitrate contamination, lacking financial resources for backup systems. Fertilizer and other chemicals applied to cropland decades ago will continue to affect groundwater for years, according to the Davis study.

“You can’t smell it,” Mrs. Quintana said of the dangers of the tap. “You can’t see it. It looks like plain beautiful water.”

Situated off the state’s psychic map, lacking political clout and even mayors, places like Seville and Tooleville to the south have long been excluded from regional land use and investment decisions, said Phoebe S. Seaton, the director of a community initiative for California Rural Legal Assistance. Residents rely on county governments and tiny resident-run public utility districts. The result of this jurisdictional patchwork is a fragmented water delivery system and frequently deteriorating infrastructure.

Many such communities started as farm labor camps without infrastructure, said John A. Capitman, a professor at California State University, Fresno, and the executive director of the Central Valley Health Policy Institute. Today, one in five residents in the Central Valley live below the federal poverty line. Many spend up to 10 percent of their income on water. “The laborers and residents of this region have borne a lot of the social costs of food production,” Professor Capitman said.

Bertha Diaz, a farmworker and single mother of four in East Orosi, rises at 4 in the morning to pick grapefruit and other crops. Her chief concern, she said, was how she would afford bottled water.

She comes home to an additional chore – filling five-gallon jugs at the Watermill Express, a self-serve drinking water station in nearby Orosi with a windmill roof. When she began receiving cautionary notices from the local water district, she formed a neighborhood committee and also joined AGUA, the Spanish-language acronym for the Association of People United for Water, a network of residents working with the nonprofit Community Water Center.

Last month, Gov. Jerry Brown signed the Human Right to Water bill, which directs state agencies to make clean water a financing priority. In the past, communities like Seville trying to make improvements got caught in a noose of bureaucratic technicalities that resulted in years of delays.

“Clean water ought to be a right,” said Bill Chiat, a program manager with the California State Association of Counties who educates government officials on water issues. “The question is, how are you going to pay for it?”

The answer is sometimes a twisted tale: In Lanare, in Fresno County, the local community services district received $1.3 million in federal money to construct a treatment plant for arsenic-tainted water. But when the system began operating, the cost of water skyrocketed – a result of lowball estimates by construction engineers, as well as the siphoning of treated water to nearby farms. “Before, it was dirty water,” said Isabel Solorio, a part-time housecleaner. “But at least it wasn’t expensive dirty water.” The plant now sits unused.

But there is a growing recognition by state and local officials that rural communities need regional solutions. One option is consolidation, in which small systems band together to create a larger system with a bigger customer base. Another might be partnering with Alta Irrigation District, which has delivered surface water for agriculture from the Kings River for 130 years. Conserved water in upstream reservoirs could also be a source for Seville and elsewhere. “It would require a new governance structure,” said Chris Kapheim, the irrigation district’s general manager. “But it would give these areas a long-term fix.”

The state is allocating $4 million for interim solutions like filters under sinks that can remove arsenic and nitrates.

Even temporary solutions cannot come quickly enough for residents like Eunice Martinez, 47, who lives in Tooleville, where water has been contaminated with arsenic and bacteria.

Mobile homes rented by farmworkers sit temptingly near the Friant-Kern Canal, a 152-mile aqueduct that supplies water for one million acres of farmland.

Long before they knew there was a health problem, Ms. Martinez and her 72-year-old mother, Margaret, had stopped drinking the water. “Honestly, it was the taste,” she said. “It just wasn’t right.”

Ms. Martinez sometimes visits family in a nearby town where the water is clean and clear, just to freshen up. “I turn on the tap and it’s, ‘Wow, I’m amazed,’ ” she said. “It’s something so simple in life. And it’s gone.”