Dog Excrement Is a Potent and Growing Water Problem

Dunedin taking steps to get fecal pollution out of waterways

Editor’s Note:  Water pollution by dogs gets worse all the time. Attempts to address this serious issue are often laced with cutesy puns that detract from the seriousness of the issue.

The Gazette has featured many anti-dog manure items,  including those of our own columnists Tiger Tom, who favors capital punishment for offenders, and B. Sharper, who has furnished numerical evidence aplenty to justify drastic action. Below is an account of actions being taken at canine-friendly Dunedin, FL. — Hardly Waite.

DUNEDIN — From doggie dining and pet-friendly festivals to a famed pet memorial mural and even a contest naming a dog the honorary mayor, this city’s embrace of its furry friends has earned it the nickname “Dogedin.”

The animals’ poo, however, is quickly becoming a contender for Public Enemy No. 1.

Looking to reduce high levels of fecal bacteria in city waterways, Dunedin has proposed strengthening an existing ordinance that already requires all pet owners to pick up their animals’ waste by creating a poo section in the city code book and clarifying that violators could risk fines or jail.

Like any other violation of city code, the penalty is a fine of up to $500 and a possible 60-day jail term. However, Dunedin leaders say it is unlikely the city would take a violator to county court seeking the maximum penalty, though City Attorney Tom Trask said it is possible for code enforcement to step in and render a small judgment in extreme cases.

The city’s transformation of “petiquette” into law is only the latest in a series of anti-pollution efforts suggested by the Florida Department of Environmental Protection, which identified Dunedin several years ago as one of many cities with elevated levels of water pollution.

Cedar and Curlew creeks, which both flow into St. Joseph Sound, were specifically mentioned as having fecal contamination.

Dunedin Public Works director Doug Hutchens said the city is already using smoke testing to detect leaks in its sewer system and has been “aggressive” in deploying pet waste disposal stations throughout the city. 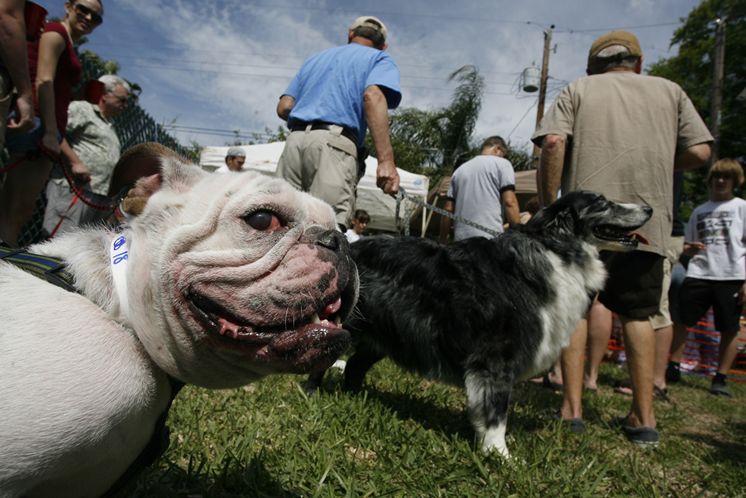 Spike, in the foreground, is good at dropping but looks the other way at pick-up time.

The poo pickup law and an accompanying educational campaign slated for later this year are the next steps.

He added: “We not only want to require people to pick up after their pets but we want to make it convenient for them when they’re in and around city parks.”

City officials hope adopting the “basin management action plan” strategies — a blueprint for pollution reduction — recommended by DEP will bring Dunedin in compliance with the federal Clean Water Act and DEP’s “total maximum daily load” standard for the state’s most polluted waterways. That’s a calculation of the maximum amount of a pollutant that a body of water can receive from various sources and still meet certain quality standards.

City commissioners are expected to consider the measure later this year along with others being examined by an Ordinance Review Committee, a citizen group appointed every few years to clean up city code language. The committee has already recommended the pet waste ordinance for approval.

Under another FDEP recommendation, the city is putting together a program to encourage all residents to abandon septic tanks in favor of connection to Dunedin’s sewer system. The idea will be presented to commissioners at a future workshop.