I’ll be quick because I’m a little ashamed to be taking time to come to the defense of a plastic Christmas tree. It’s like defending Spam, or high fructose corn syrup.

One, the guy from the wooden, bushy  Christmas tree industry in the National Geographic article refers to his trees as “real” and to the plastic trees as “fake.” What is so real about having a dead factory farmed tree in your living room? It isn’t any more a tree than the plastic one is.  A pretend tree in the living room  is a fake tree. Wood or plastic, it’s still a fake tree.

Two, the bushy fake tree advocate also leaves out things like the undisputed fact that  people often use plastic trees for many years. This changes the whole equation.  He assumes that everyone buys a plastic tree shipped from China, throws it away, then buys another just like it next December.  I confess that I actually know people who have plastic Christmas trees.  Several people.  And I don’t know any who pitch the tree at the end of the season so they can get next year’s upgraded model. A plastic tree is a plastic tree, and if you’ve got one you might as well stick with it. Next year’s won’t have a better operating system.

Three, the wooden tree argument just assumes, without showing any evidence, that it takes more water to produce a plastic fake tree than a wooden one.  I remain unconvinced.  Trees, especially young ones (and Christmas trees, let’s be frank, are murdered before they even reach adolescence), are very, very thirsty little guys.  And when you add in the re-use factor, it’s clear that the bushy tree water saving theory doesn’t hold water.

The bushy tree advocate also fails to mention that plastic trees don’t have to be made in China.  He says most of them are made in China.  I frankly don’t give a flip where they’re made, but if having the manufacturing pollution and water consumption in the US rather than China is really important to us, perhaps a Made In USA tree could capture the market. And if you made it out of recycled plastic, it would be a sure winner. Or who says fake trees have to be made of PVC?  Why not old automobile tires or recycled waffle irons?

The big hole in the bushy tree argument, though, is that it assumes the non-existence of the best environmental and water-saving choice of all–not having a Christmas tree. There’s not a hint in the article that a person could get by in our civilization without a Christmas tree. It’s either a plastic tree or a bushy tree.  It’s like saying it’s good to kick your dog because it’s better than kicking your sister.

Did Jesus’ family have a Christmas tree?  Of course not. It was actually a 16th century German (probably one who owned a lot of scrubby useless trees that he needed to get rid of) who invented the Christmas tree. Since that time the whole of western civilization thinks it has to rush to the Christmas tree lot as soon as the merchants start ringing the bells. 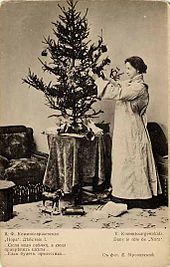 What could be weirder than having a having a big, messy fire hazard in your living room at holiday time?