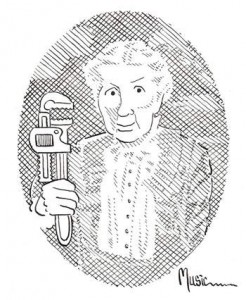 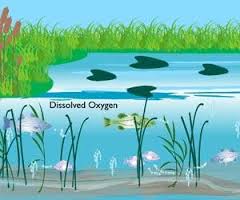 Our atmosphere consists of around 21 percent oxygen.  Water, however, has only a fraction of 1 percent.

Oxygen dissolves into water at the point where water and air meet.

Dissolved oxygen, called DO, is made up of microscopic bubbles of oxygen gas in water.  This dissolved oxygen is critical for the support of plant life and fish.

According to one authority, “DO is produced by diffusion from the atmosphere, aeration of the water as it passes over falls and rapids, and as a waste product of photosynthesis.  It is affected by temperature, salinity, atmospheric pressure, and oxygen demand from aquatic plants and animals.”

Dissolved oxygen is measured as percent saturation or as parts per million (ppm) or milligrams per liter (mg/L).   As the chart below indicates, oxygen dissolves easily into cold water, not so easily into warm, and not at all into boiling water. 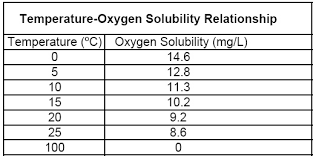 Oxygen can be added to water by simple aeration techniques which involve exposing the water to air.  Ozone is also used in water treatment to greatly increase the oxygen content of water.

Glasses show how oxygen leaves water.  Milky water on left with high level of dissolved oxygen.  On the right, the air has gone back to the atmosphere and the water is clear.  Often a film will be left at the surface or “skin” at the top surface of the water.  When cloudy water clears from bottom to top. the discoloration is harmless air.  Water cloudy from silt clears from top to bottom and leaves residue at the bottom of the glass.