Desert Beetle May Have the Answer to Many Water Issues

An enterprising nanotechnology company believes that it has created a marvelous self-filling water bottle by imitating the natural process of hydration used by the Namib Desert beetle.

NBD Nanotechnologies has imitated the beetle’s uncanny ability to extract water from dry desert air.  The beetle lives in one of the world’s most arid regions (about 1/2 inch of rainfall per year) and has developed a unique survival technique by drinking water that it collects from tiny droplets that its bumpy back collects from the atmosphere. 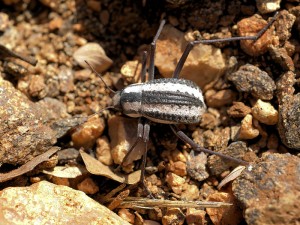 The Namib Desert beetle drinks by the means of its own bumpy back surface, which provides for accumulation of water droplets of fifteen to twenty micrometers in diameter.

Here’s how one writer describes the process:

To drink water, the Namib beetle (genus Stenocara) stands on a small ridge of sand. Facing into the breeze, with its body angled at forty-five degrees, the beetle catches fog droplets on its hardened wings. Its head faces upwind, and its stiff, bumpy outer wings are spread against the damp breeze. Minute water droplets from the fog gather on its wings; there the droplets stick to hydrophilic bumps, which are surrounded by waxy, hydrophobic troughs. Droplets accumulate and coalesce until their combined weight overcomes the water’s electrostatic attraction to the bumps as well as any opposing force of the wind; in a thirty-kilometer-an-hour breeze, such a droplet would stick to the wing until it grows to roughly five millimeter in diameter; at that point it would roll down the beetle’s back to its mouth parts.

The water droplets in fog are, on average, just one one-thousandth of an inch across, and the largest ones are only twice that size. The droplets are so small, in fact, that they often don’t fall downward; instead they get carried sideways or even upward by currents of wind.The trick to drinking fog is getting the droplets to aggregate, so that wind and electrostatic forces no longer overwhelm gravity. When a wind-blown fog droplet lands on a hydrophilic (water-loving) surface, such as clean glass or stone, the drop flattens out because of the electrostatic attraction between the molecules of water and those of the surface. The cross section of the flat drop is too small for the wind to pick it back up. And, because water molecules so strongly attract each other, the flat drop also presents a highly hydrophilic surface to which other droplets can attach.

To mimic nature,  NBD Nanotechnologies layered a surface with hydrophilic and hydrophobic coatings, used a fan to pass air over the surface, and managed to get water to condense. This eventually led to the design of a conceptual self-filling water bottle.

The best part, according to the developer, is that it uses virtually no energy and can be run entirely by solar cells and a rechargeable battery.

The company points out that there are  more than three quadrillion gallons of water in the air, which is essentially a massive untapped resource.