Desalination: Will It Solve Our Water Shortage? 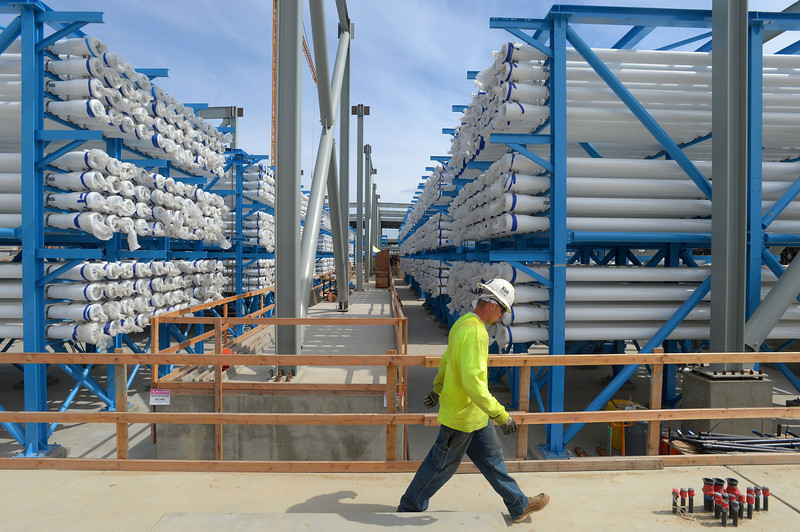 But just across the road, another scene, unlike any other in the state’s history, is playing out: More than 300 construction workers are digging trenches and assembling a vast network of pipes, tanks and high-tech equipment as three massive yellow cranes labor nearby.

The crews are building what boosters say represents California’s best hope for a drought-proof water supply: the largest ocean desalination plant in the Western Hemisphere. The $1 billion project will provide 50 million gallons of drinking water a day for San Diego County when it opens in 2016.

Since the 1970s, California has dipped its toe into ocean desalination –talking, planning, debating. But for a variety of reasons — mainly cost and environmental concerns– the state has never taken the plunge.

Fifteen desalination projects are proposed along the coast from Los Angeles to San Francisco Bay. Desalination technology is becoming more efficient. And the state is mired in its third year of drought. Critics and backers alike are wondering whether this project in a town better known as the home of Legoland and skateboard icon Tony Hawk is ushering in a new era.

Will California — like Israel, Saudi Arabia and other arid coastal regions of the world — finally turn to the ocean to quench its thirst? Or will the project finally prove that drinking Pacific seawater is too pricey, too environmentally harmful and too impractical for the Golden State?

“I think it will be a growing trend along the coast,” he said. “The ocean is the one source of water that’s truly drought-proof. And it will always be there.”

To supporters, the Carlsbad Desalination Plant is a historic engineering marvel. And it is a survivor, having endured six years of government permitting, from the Carlsbad City Council to the California Coastal Commission. Supporters won 14 lawsuits and appeals by environmentalists before finally breaking ground in December 2012.

“They went through seven or eight years of hell to get here,” said Tim Quinn, executive director of the Association of California Water Agencies. “But they stuck it out. They got it done. If it succeeds, it will encourage others to try. And if it fails, it will have a chilling effect.”

To critics, the plant is a costly mistake that will use huge amounts of energy and harm fish and other marine life when it sucks in seawater using the intakes from the aging Encina Power Plant next door.

“This is going to be the pig that will try for years to find the right shade of lipstick,” said Marco Gonzalez, an Encinitas attorney who sued on behalf of the Surfrider Foundation and other environmental groups to try to stop construction. “This project will show that the water is just too expensive.”

For the plant to be a success and copied in other parts of the state, Poseidon will have to deliver high-quality drinking water at the price promised — and not cause unexpected impacts to the environment such as fish die-offs.

“It’s a test case,” said Ron Davis, executive director of Cal Desal, an industry advocacy group. “We like to tease them: Only the entire future of desal is riding on this project. No pressure.”

Almost every discussion about desalination begins and ends with cost.

Desalinated water typically costs about $2,000 an acre foot — roughly the amount of water a family of five uses in a year. The cost is about double that of water obtained from building a new reservoir or recycling wastewater, according to a 2013 study from the state Department of Water Resources.

And its price tag is at least four times the cost of obtaining “new water” from conservation methods — such as paying farmers to install drip irrigation, or providing rebates for homeowners to rip out lawns or buy water-efficient toilets.

“We look out and see a vast ocean. It seems obvious,” said Heather Cooley, water director for the Pacific Institute, a nonprofit research organization in Oakland. “But it’s cost prohibitive for most places in California.”

In Carlsbad, two gallons of seawater will be needed to produce each gallon of drinking water. And to remove the salt, the plant will use an enormous amount of energy — about 38 megawatts, enough to power 28,500 homes — to force 100 million gallons of seawater a day through a series of filters. The process, known as reverse osmosis, removes salt and other impurities by blasting the water at six times the pressure of a fire hose through membranes with microscopic holes.

San Diego County is better suited than any large California community for desalination. It receives only 10 inches of rain a year, one-third less than Los Angeles, Fresno or San Jose. It has very little groundwater. And it has a large customer base to spread out the cost of the Carlsbad plant, which will provide about 7 percent of the total water needs of the county.

The high price is worth it to help San Diego and other regions rely less on water from the Colorado River and the Sacramento-San Joaquin River Delta, both of which are overdrawn and increasingly unreliable, said Bob Yamada, water resources manager for the San Diego County Water Authority.

“You can’t conserve or recycle what you don’t have,” Yamada said.

The authority will pay from $2,014 to $2,257 an acre foot for the water, depending on how much it buys. The agency, which provides water to 3.1 million people in San Diego County, signed a 30-year contract agreeing to buy at least 48,000 acre feet a year.

With that guarantee, Poseidon and its investors were able to sell bonds to finance the project. The company will be guaranteed a rate of return between 9 and 13 percent, depending on operating costs.

Critics say the agency is getting a raw deal.

Nobody disputes that the cost of water will go up. According to Yamada, the average customer’s bill, now $71 a month, will rise $5 to $7 to pay for desalination.

Sometimes the high costs can turn off the spigot.

After enduring severe water shortages during a drought in the late 1980s, Santa Barbara voters agreed to spend $34 million to build a desalination plant. It opened in 1991 and provided water for four months. When the drought ended, the city shut it down. Water from reservoirs and other sources was significantly cheaper.

Similarly, Australia spent more than $10 billion building six huge seawater desalination plants during a severe drought from 1997 to 2009. Today, Cooley noted, four are shut down because when rains finally came, the cost of the water became noncompetitive.

“We run the risk of building facilities that we don’t use,” Cooley said. “And that’s a waste of money.”

Earlier this month, the Santa Barbara City Council voted to spend $935,000 to hire an engineering firm, law firm and lobbyist to try to restart the city’s shuttered plant by 2016.

“None of us wants to do it, but I was there 25 years ago, and it’s really ugly when you run out of water,” said Santa Barbara City Councilman Harwood “Bendy” White. “This is one option for stretching out our supplies.”

Similarly, the California American Water Company in Monterey County is studying three locations to build a desal plant to make up for water lost when state regulators ruled the company didn’t have valid permits for the Carmel River. In Los Angeles, leaders of the West Basin Municipal Water District, which serves about 100,000 people, built a pilot plant in Redondo Beach and are studying plans for a $300 million desalination plant by 2020.

Desal technology continues to improve. It now takes only a quarter of the electricity to generate drinking water as it did in the 1980s because of more efficient pumps, membranes and energy-recovery devices, said Tom Pankratz, editor of the Water Desalination Report, a newsletter based in Houston.

But some places are balking.

Santa Cruz city officials in August shelved plans for a desal plant after environmental activists raised fears that the new water might trigger more growth. Marin County studied a desal project, then dropped it when water use declined. Long-running plans to build a desal plant in San Francisco Bay near Concord were shelved this year when the region’s largest water districts decided they could obtain water more cheaply through recycling and other means.

Another key issue looming large is how to get the seawater without hurting the marine environment.

The Coastal Commission approved the Carlsbad plant and its open-ocean intake system. But new scientific studies and changing laws mean that most future plants probably will be required to bury intake pipes and pump water at a lower rate to reduce impacts on fish and the millions of larvae, eggs and other sea life that can be killed.

“These organisms become things — like fish — and we always have to be careful of the perspective that ‘Oh, this is just one little piece,'” said Charles Lester, executive director of the Coastal Commission. “It all adds up.”

Plans by Poseidon to build a desalination plant in Huntington Beach slowed last year when the Coastal Commission said it wanted the company to investigate whether its pipes could be buried, a prospect that will increase costs. For the Carlsbad plant Poseidon was required to build 66 acres of wetlands in San Diego Bay to offset the plant’s environmental harm. It also must blend its brine at a 5:1 ratio with other seawater before flushing it back into the ocean so it won’t harm marine life. Other projects will have to do all those things to get state permits.

But some experts say the plants are coming anyway.

“In the next 10 years you are probably going to have three big plants built in Southern California and another plant or two in Northern California,” Pankratz said. “The trend is toward more desal. They are the most reasonable insurance policy against a long, protracted drought.”