How razing the rainforest has created a devastating drought in Brazil

Twenty million people in Sao Paolo now face severe rationing due to the disruption of the far-away Amazon’s rain-making machine, 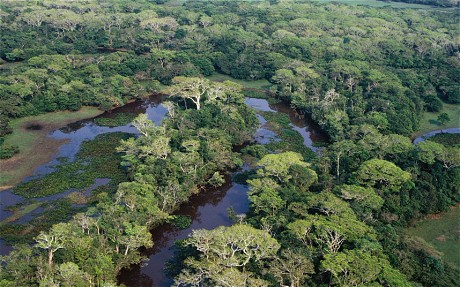 The vast forest generates its own rain, which then falls across the country.

It used to be known as “drizzle city”, but now Sao Paolo – South America’s biggest conurbation – is now being compared with a desert. In what should be the middle of a rainy season, it is so dry that its 20 million inhabitants face having their water cut off for five days a week.

The giant Cantareira reservoir system, which supplies nine million people, is now only 5 per cent full, and predicted to run dry in April. The smaller Alto Trietê system, which serves three million people in the city, is a little better off, but still only 15 per cent full. With the dry season due, it is calculated that only severe rationing can stop the city’s water from running out altogether before the rains start again in November.

Some economies have so far been made.The daily amount extracted from reservoirs has been cut by 22 per cent, and some residents are already having their water cut off for 16 hours a day. But far more is needed, and there have been warnings that, before long, the taps will only run on two days each week.

Already, better-off citizens are buying large tanks in the hope of being able to hoard water. Many apartment blocks are trucking the stuff in at great cost; others are trying to drill wells. But most of the people can resort to none of these measures. Water riots could be on the cards.

Years of maladministration and neglect play some role in this. The gathering crisis was ignored in the run-up to last year’s World Cup, and in the elections that followed it. So does lack of maintenance: it is estimated that 40 per cent of the Brazil’s water supplies are lost through leaking pipes and outdated infrastructure.

But population growth and other environmental factors are also to blame. Climate change is believed to have had an effect. So is the way that cities burn so much energy they become ‘heat islands’, sucking up moisture. But perhaps the biggest and most alarming factor behind the drought is deforestation in the Amazon basin to the north.

Study after study has now shown that the vast Amazonian forest generates its own rain, with the trees continuously recycling moisture blown in on easterly winds from the Atlantic. The rain-laden winds go on travelling west until they hit the high barrier of the Andes, and then turn south and east, dumping rain over the agricultural lands that form Brazil’s breadbasket and Sao Paolo itself. This giant rainmaking machine is now breaking down as its constituent parts disappear.

The one silver lining of this lack of clouds is that Brazilians finally seem to be waking up to the problem. Social movements and unions are joining environmentalists in calling for the deforestation to stop, as they see that ecological destruction brings poverty in its wake. Whether they succeed is another matter.