Death of the Lush, Green Lawn. It’s About Time!

Death of the lush, green lawn 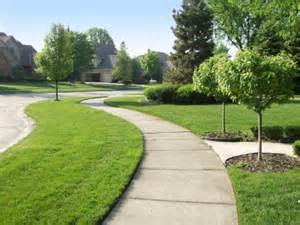 Introductory Note:  Unlike High, whom you’ll meet below, I have never been addicted to the lush lawn.  In fact, I take some pride in being way ahead my time in this.  Many years ago, when lawn adoration was virtually a social necessity, watering, mowing, and bagging grass were never among my interests. I have always mowed just enough to keep Code Enforcement from my door. Several years ago our city government started an anti-bagging campaign to save landfill space. They actually gave awards and cash prizes to people who swore off bagging. There was no award for me, who have never in my life bagged a single blade of grass. Nor have I ever received an award for not watering my lawn or for not mowing it, though these save water and energy and reduce pollution. Being ahead of one’s time isn’t easy.–Gene Franks.

My father was an early member of a group now known disparagingly as “ultra-lawn people.”

“High,” as everyone called him, was dedicated, body and soul, to the Sisyphean task of trying to maintain a lawn full of lush St. Augustine grass in hot, dry Texas. He planted, watered, fertilized, watered, mowed, watered, fought bugs and brown patch, watered, re-planted, watered… ad nauseum. Some years he won, in other years, nature rolled him.

High departed his lawn and this Earth well before climate change turned Texas from merely hot & dry into scorched & parched. I know he would’ve denied it at first, but I think even he would’ve finally given in to today’s new reality: In our drought-ravaged Southwest, the lush lawn is dead. Literally and ethically.

From Texas to Southern California, city after city is adapting to nature. They’re policing neighborhoods to impose big fines on excessive lawn watering, paying homeowners and businesses to rip out grass and replace it with desertscapes, and even outlawing grass yards in new developments. And, it’s working. A pioneering 2003 turf-removal rebate program in Las Vegas, for example, has now pulled 168 million feet of thirsty lawn grass out of the area, saved more than 9 billion gallons of water, and cut water use by a third, even as the population has mushroomed.

Such an effort would’ve been treated as heresy only a decade ago, but now it’s simply considered the right thing to do. This is not merely an environmental adjustment, but a fundamental ethical shift, especially among younger people. The idea that green lawns are exercises in ecological narcissism has taken root in this arid and politically conservative region – demonstrating that conservatism really can be about conserving. Mother Nature and future generations will be grateful.