Gazette Note: This article is from the outstanding online environmental newsletter, Rachel’s Environmental Newsletter. You can  read back issues at http:www.rachel.org

There were just over 4 million live births in the U.S. in 1992 (4,065,000, to be exact), according to the STATISTICAL ABSTRACT OF THE UNITED STATES 1997.[1] In addition to these live births, there were 30,000 fetal deaths in 1992, the most recent year for which we have data.[2] A fetal death is one that occurs after at least 20 weeks of gestation in the womb but prior to birth. In actuality, there were very likely more than 30,000 fetal deaths in 1992. The STATISTICAL ABSTRACT (table 124) says, “There is substantial evidence that not all fetal deaths for which reporting is required are reported.” In any case, life expectancy at birth in the U.S. in 1992 was 75.8 years,[3] so fetal deaths that year resulted in the loss of at least 30,000 x 75.8 = 2.27 million person-years of life. In addition, of course, many of these 30,000 fetal deaths precipitated a personal crisis for the parents.
In addition to fetal deaths, there are spontaneous abortions — pregnancies that terminate spontaneously before the end of the 20th week of gestation. These are far more common than fetal deaths, though the exact number is not known. Various studies estimate that spontaneous abortions occur in somewhere between 6.5% and 21% of all pregnancies.[4] Thus in 1992, there may have been at least 265,000 to 855,000 spontaneous abortions in the U.S.

Together, spontaneous abortions and fetal deaths are termed “miscarriages.”

Recent studies indicate that some miscarriages –as well as some serious birth defects –may be caused by the chlorine added to drinking water as a disinfectant.

In the U.S., chlorine is added to public drinking water supplies as a public health measure to kill harmful bacteria in the water. The added chlorine reacts with naturally-occurring organic matter in the raw water (chiefly humic and fulvic acids), creating a host of chlorinated chemicals as by-products. Health agencies, including the federal EPA [Environmental Protection Agency] simply ignore most of these by- products and know almost nothing about them. Instead, they focus on four by-products, allowing these four to act as surrogates for all the others. The four that EPA pays attention to are chloroform, bromoform, bromodichloromethane, and chlorodibromomethane. Together, these four are called “trihalomethanes” or THMs. According to federal drinking water regulations, if a public water supply serving over 10,000 people contains more than 100 parts per billion (ppb) of total trihalomethanes, the water is unacceptable. However, since there are usually no other available sources of drinking water, EPA is usually not in a position to do anything except urge the water supplier to try to clean up its act.

A study by the California Department of Health published in March, 1998, tracked the drinking water consumption and the pregnancy outcomes of 5144 pregnant women in a prepaid health plan during the period 1989- 1991.[5] This was a prospective study –the drinking water consumption of the women was ascertained as soon as their pregnancy was registered in the study’s database. Later, the outcome of their pregnancy was compared with the amount of water they drank and the total amount of trihalomethanes they received by drinking water (information received from the water companies). The study found that 16% of women drinking 5 or more glasses of water per day containing more than 75 ppb THMs had miscarriages, whereas only 9.5% of women drinking less water, or water lower in THMs, had miscarriages. Thus among women with high exposure to THMs in drinking water, the likelihood of spontaneous abortion was 1.8 times as great as it was among women with low exposure. Furthermore, spontaneous abortion occurred, on average, a week earlier among women with high exposure (10.2 vs. 11.2 weeks of gestation). The strength of this study was its prospective nature; it did not rely on women to remember how much water they drank in the past.

To see if their results represented a real effect, the researchers compared women who filtered their water, or who let the water stand before drinking it, with women who drank it straight from the tap. (THMs are volatile and will slowly leave water that is allowed to stand.) The results were consistent with THMs causing spontaneous abortion.

This statewide study in New Jersey found a doubled risk of neural tube defects among those with the highest exposures to THMs in drinking water. This study pointed out that exposure to THMs can also occur through the contamination of indoor air. Flushing toilets, showering, and washing dishes and clothes, can inject THMs into household air, exposing residents.

A previous study of 75 New Jersey towns by Frank Bove had examined 80,938 live births and 594 fetal deaths that occurred during the period 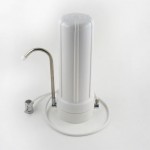 1985-1988. This study examined public water company records and compared pregnancy outcomes to the amounts of THMs delivered to the home in drinking water. It did not examine the amount of water ingested. The study found no relationship to fetal deaths, but the likelihood of neural tube defects was tripled by exposure to THMs at levels exceeding 80 parts per billion.

This study provoked a letter to the editor of the AMERICAN JOURNAL OF EPIDEMIOLOGY,[8] in which the authors suggested a biological mechanism by which trihalomethanes might cause neural tube defects. Neural tube defects are known to be associated with vitamin B12 deficiency and the letter pointed to studies showing that vitamin B12 use by the body can be disrupted by chloroform, one of the four main trihalomethanes in chlorinated drinking water.

An even earlier case-control study reported on pregnancy outcomes among women who delivered babies at Brigham and Women’s Hospital in Boston during the years 1977-1980. Indicators of water quality were taken from public water supply companies. No data were available on the amount of water ingested. The water quality indicators were compared among 1039 cases of babies born with birth defects, 77 stillbirths, and 55 neonatal deaths (babies that died within a week of birth) vs. 1177 controls. Stillbirths were 2.6 times as common among women exposed to chlorinated surface water, compared to controls whose water was disinfected with chloramine instead of chlorine.[9]

More recently, a study of drinking water and pregnancy outcomes in central North Carolina reported a 2.8-fold increased likelihood of miscarriage among women in the highest exposure group for trihalomethanes in drinking water.[10]

Very recently, a second study from the California Department of Health has shown that, in one area of California, women who drank cold tap water had nearly a five-fold increased risk of miscarriage, compared to women who drank mostly bottled water very low in trihalomethanes.[11] Bottled water is often disinfected by a process called ozonation instead of chlorination. Bubbling ozone through water kills bacteria effectively, avoids the distinctive taste and odor of chlorine in the treated water, and produces no dangerous trihalomethanes. Many people buy bottled water simply to avoid the taste of chlorine.

U.S. EPA is currently setting new standards for trihalomethanes in drinking water. The new regulations would apply to all water companies, not just those serving 10,000 people or more, and they would limit total THMs to 80 ppb, down from the present 100 ppb.[12] Still, since several studies link trihalomethanes at 75 ppb or even less to increased miscarriages, EPA’s new standard seems dubious even before it has been established.

American water suppliers seem stuck on chlorination as the best way to disinfect drinking water. However, many European cities, and some Canadian cities, such as Ottawa, have long ago turned away from chlorination in favor of ozonation to disinfect their water. In recent years, a few smaller American cities have begun to use ozonation: Emporia, Kansas and Littleton, Massachusetts, for example. The Santa Clara Valley Water District in California has announced that it is switching to ozonation over the next 5 to 8 years, as has the city of Las Vegas, Nevada.

Still the vast majority of water supplies in the U.S. remain chlorinated. And water quality experts remain in the dark about trihalomethane levels in water delivered to customers. Kellyn S. Betts, writing in ENVIRONMENTAL SCIENCE & TECHNOLOGY quotes the EPA official in charge of the new THM regulations saying no one knows how many U.S. water systems deliver water with THMs exceeding 75 ppb.[12] Betts says the American Waterworks Association confirmed for her the absence of data on THM levels in U.S. drinking water systems. The current reporting system only keeps track of water systems that exceed 100 ppb as an annual average.

Erik Olson, a water quality expert with the Natural Resources Defense Council (NRDC), an environmental group in New York City, points out that THM levels in water supplies typically increase by as much as a factor of 1.5 to 2 during the summer months. And he says short-term exposures may be very important in producing some of the pregnancy outcomes reviewed here –spontaneous abortions, fetal deaths, and serious birth defects. “We may be totally overlooking the risk of short- term exposure,” Olson said.[12]