This morning’s water news (August 3, 2014)  is filled with stories and pictures of the episode of microcystin contamination in the city of  Toledo, Ohio water supply.  Officials in Toledo warned residents not to drink the water and cautioned that boiling (a frequent emergency strategy for bacterial contamination) would only make things worse.  This is no small issue since it leaves 500,000 people without drinking water.

As usual, bottled water is the quick fix for supplying potable water, but providing bottled water for half a million people is no small matter.  The picture below suggests that supplies were in short supply. 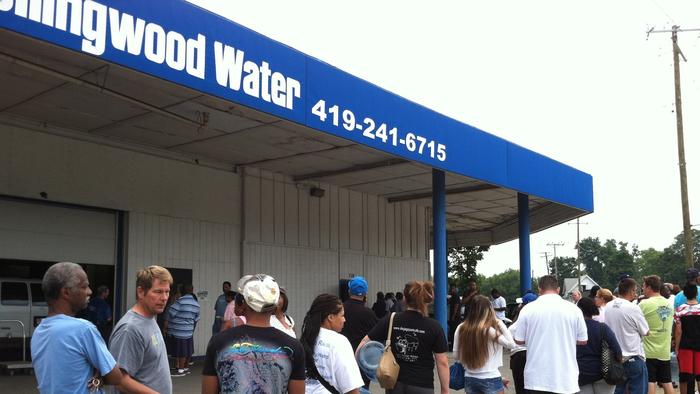 I watched several news reports and read a few news releases.  Not one mentioned that home water treatment devices owned by the residents involved might be used.

Microcystin is one of a large number of toxins that are grouped under the name of cyanotoxins, and microcystin itself exists in several forms.  It all starts with blue-green algae,  also called cyanobacteria,  which are microscopic aquatic organisms. They are ancient creatures that  produced Earth’s earliest fossils.  Some blue green algae (often identified as “pond scum”) are important sources of human nutrition but others put out toxic ingredients called cyanotoxins that are harmful to humans.  Algae contamination of lakes has become very common because of overuse of fertilizers. 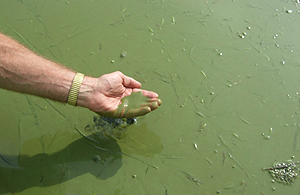 According to Water Technology magazine, “Algae-containing water can be swallowed, can contact the skin or is inhaled in aerosol-like droplets while swimming or showering. Cyanotoxins can cause gastrointestinal and lung ailments; allergic responses; skin and eye irritation; liver damage; tumor growth; and neurotoxic (nerve) reactions. Effects of long-term consumption uncertain.”

Advice on water treatment for cyanotoxins from a web search ranges from the overly complex to the downright simple minded.  Bulletin board advice suggests “popping some activated charcoal to help neutralize these toxins” and taking milk thistle to protect the liver.  At the other extreme are a doctoral dissertation long on theory and short on practical advice and a technical paper on “Removal of microcystin-LR from water by polymers based on N-vinylformamide structure.” Another study features “a new kind of low-cost syntactic adsorbent from bamboo charcoal and chitosan” for use in impoverished regions.  Yet another describes an experimental project with a ” hollow fiber microfiltration pilot plant (2–4 m3/h)” in which ” high removals of cyanobacteria (98%) and total algae (99%) were obtained.”  Not very helpful for  the home owner who wants protection from microsystin.

The WHO and the EPA offer advice aimed mainly at public water suppliers, not individuals.  In both cases, the treatment recommendations are broad and generalized.  The EPA, for example, notes the effectiveness of chlorination and potassium permanganate to control the organism but warns of problems with side effects. Likewise, the possibility of using flocculation and subsequent filtration has its pros and cons.   Powdered activated carbon can be used to remove toxins as can granular activated carbon.  “GAC filters are effective in removing microcystins if they are properly replaced or regenerated when total organic carbon breakthrough is high. Usually, higher concentrations of activated carbon are necessary to effectively remove toxins; repeated treatment may be needed to totally remove the toxins completely.”  The EPA also notes the effectiveness of UV for controlling cyanotoxins but says that high doses are needed.

These, as mentioned, are strategies for city water departments, not homeowners. In general, they are not commonly practical for city water suppliers.  Carbon beds large enough to effectively remove toxins of this nature are not used by most municipal suppliers.

Activated carbon is effective and can resolve cyanobacteria-caused taste and odor issues.  Reverse osmosis (RO), nanofiltration and ultrafiltration will remove/reduce single-cell cyanobacteria, and may also help reduce cyanotoxins.  Disinfection methods (such as chlorination) may kill cyanobacteria but not eliminate the cyanotoxins they release.

Finally, the search for microsystin with a variety of keywords got one persistent ambulance chaser ad for ceramic filters. The linked site itself does not discuss microsystin, but the ad implies that the ceramic filters advertised will take care of the problem.

What I would do if I lived in Toledo

What conclusions should we draw from this in regard to common home water treatment devices?

Although untrafiltration, microfiltration, and nanofiltration devices have been used with some success to treat microsystin, these are not commonly used in homes. Reverse osmosis units, however, are common, and RO has been shown to be 95% plus effective in this area.  If I lived in Toledo,  I would trust my undersink RO unit, with its extremely tight membrane and two carbon block filters. Keep in mind that the same reservations that apply to using RO in standard “boil water” situations also apply here: While the contaminants in question are too large to pass through the RO membrane, the device itself was not designed for long-term “sanitation” of water that is infested with dangerous bacteria. Live organisms can grow around o ring seals.  But, on a short term basis, I would trust my RO unit.

Chlorine, in high enough doses, can control cyanotoxins, but the dosage used by public water supplies is too low.  Chloramine is not effective against cyanotoxins.

I can’t find evidence that would make me trust a ceramic filter in this situation, although a good ceramic filter with a carbon core would probably produce safe water.

To wrap it up, I would drink water from my home RO unit if I lived in Toledo, but I would be reluctant to recommend that others do the same. As they always say, “More research is needed.”