Current Drought Is the Most Severe on Record

The National Drought Mitigation Center at the University of Nebraska-Lincoln has been monitoring droughts for a dozen years and it says that the current dry spell afflicts more of the nation than ever before.

Analysis of the latest drought monitor data revealed that 46.84 percent of the nation’s land area is in various stages of drought.

The map below (from the National Drought Mitigation Center) shows the situation as of Independence Day, 2012. 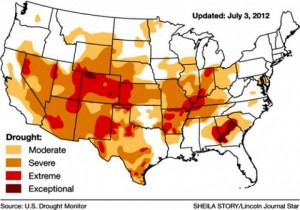 Across much of the western United States,  extremely dry  conditions have caused cities, farms, and businesses to fear for the future of their water supply as demand outstrips availability.The striking picture below tells it all. 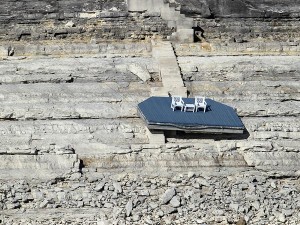 A once-floating dock was left high and dry by drought conditions that lowered the level of Medina Lake some 52 feet (16 meters). The lake, which provides water to Texas farmers and the city of San Antonio, is shrunken thanks to an ongoing drought that includes the driest, hottest 12 months in Texas’ recorded history

More about the drought