If the plant were to fail during the storm, “the result would be catastrophic.”

The huge storm coming into the east coast this week poses a major threat to aging wastewater treatment plants like the one in Cheshire, CT according to The Cheshire Citizen.

The plant is tucked behind athletic fields, but it is vitally important to the town as it treats waste from 120 miles of sewer mains.  The Cheshire plant was built in 1971 and received an upgrade in 1991. 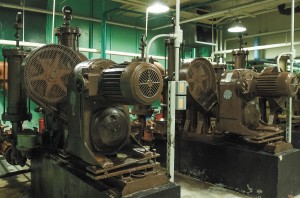 Much of the equipment is the original, and “most of the manufacturers who made that equipment don’t even exist anymore.”

The plant will have to process wastewater  from a large drainage area. Heavy rains may create a massive overload on the 40-year-old system, which is sorely in need of a major overhaul.

Rain from the heavy storms will bring in wastewater and runoff water that will need to be cleaned at the plant.  Dennis Dievert, plant supervisor, said the results “would be catastrophic. We can’t stop waste from coming in here.”

The situation in Cheshire is not unique.  As infrastructures age nationwide and “no new taxes” sentiment freezes funding that would let local governments make improvements,  public health and welfare are at risk. One of the ironies of our time is that Americans don’t blink at billions spent to bomb foreign cities to “make us safe,” but are very stingy when it comes to spending a few dollars on their own safety and well-being at home.

In the case of Cheshire, the situation is dire.

“If the plant (doesn’t) operate, we will have a major public health calamity,” said Town Manager Michael Milone.

Milone said if the plant fails, huge fines by the state would be secondary to “raw sewage flowing into the Quinnipiac River and backing up into sections of town.”

The city has a $31.15 million referendum for upgrade of the aging plant on the ballot for November 6.

Read the entire article in the  Cheshire Citizen.

Editor’s Note:  As feared, this facility and others in the area were indeed forced to dump millions of gallons of raw sewage because of the overload of wastewater from the hurricane.   Go here for details.