Cold Water Swimming May Be for You. And Maybe Not.

Cold water swimming is a big event in certain parts of the world as a Christmas  or  New Years celebration, but it is also a routine practice of many at any time when the weather and the water are cold.  It is a little-publicized sport, although there are those who keep records about it.  Health benefits are usually associated with the practice, although these have not been verified. 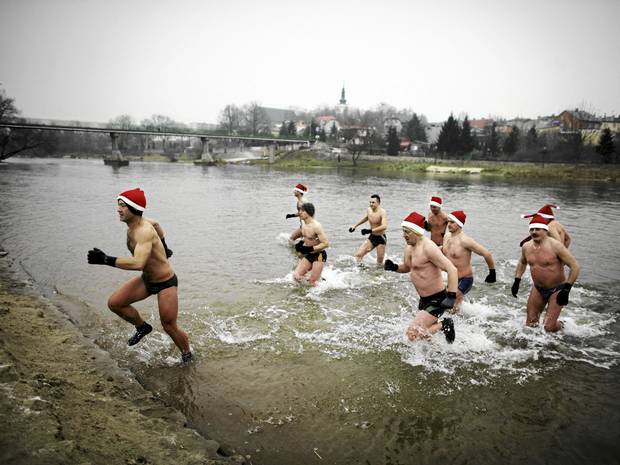 December 23, 2012: People take part in an annual Christmas bath in Warta river, with the outdoor temperature reaching 10 Celsius below zero in Uniejow near Lodz central Poland.

The South London Swimming Club sponsors a very popular event (so popular that online registration for the  upcoming competition has been cancelled because of excessive demand)  called the Cold Water Swimming Championships.   Here is information from the Club’s notice of the upcoming event:

This biennial event has become a must for cold water swimmers, attracting both the experienced cold water swimmer and people who are trying it for the first time. Age and ability is no barrier as, with water temperatures as low as 3°C, jumping in for the 30 yard races is a challenge in itself.

The Cold Water Swimming Championships celebrates the fun and camaraderie of cold water swimming and the competiton is often just friendly but can also be fierce. There are a variety of races this year, from the traditonal “head-up” breaststroke, the freestyle dash and relays to the 450 metre challenge for the really fool hardy. To help the competitors recover there will be a Finnish sauna available after the races as well as good food, a host of stalls and entertainment going on throughout the day.

Here is a taste of the SLSC Cold Water Swimming Championships.

If you’re looking for an event near you, here’s a Wikipedia rundown of some of the main events:

In Finland, Northern Russia, Norway, Sweden, Denmark, Estonia, Lithuania and Latvia, the cold-water swimming tradition has been connected with the sauna tradition.

Ice swimming on its own is especially popular in Finland. There is an Avantouinti (ice-hole swimming) and the Avantouinti Society.

Famous locations include the Serpentine Lake in Hyde Park, London.

In Harbin, northern China, many ice swim in the Songhua River.

There are strong traditions for cold-water swimming and dousing with cold water in Russia. They are done for health benefits, as a ritual of the Orthodox Church for the feast of the Baptism of Our Lord, and for sports. Such club members are called “walruses” (Russian: моржи) instead of “polar bears”.

The members of Canadian and American Polar Bear Clubs go outdoor bathing or swimming in the middle of winter. In some areas it is unusual or ceremonial enough to attract press coverage. Polar Bear Swims are conducted as fund-raisers for charity, notably the Special Olympics.

The oldest ice swimming club in the United States is the Coney Island Polar Bear Club of Coney Island, New York, who hold an annual polar plunge on New Year’s Day as well as regular swims every Sunday from November to April.

The International Ice Swimming Association was founded by Ram Barkai of South Africa and conducts 600m and 1-mile swims in open bodies of water whose water temperatures are less than 5°C (41°F).

The World Winter Swimming Championships are also held annually in Europe where Extreme swimming events attract hundreds of athletes from dozens of countries.

To end this, here’s a famous cold water swimmer out of his usual element making an underwater delivery in warm water: 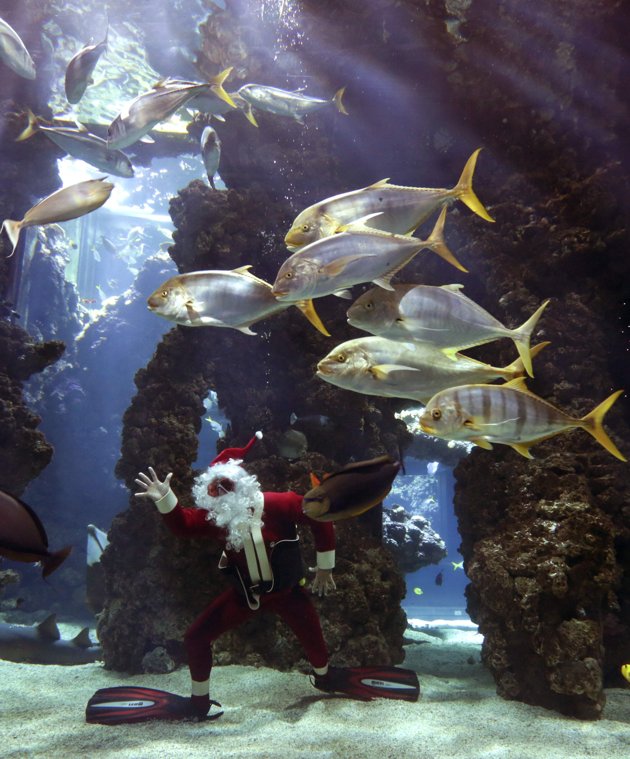 Joy to the fishes in the deep blue sea/
And joy to you and me.