Closed Forever: The End of an Era 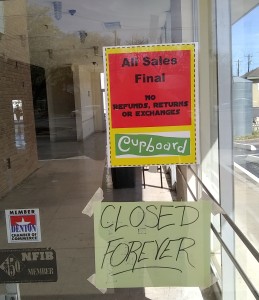 Cupboard Natural Foods, a North Texas institution and for many year Denton’s leading natural food store, closed its doors for the last time in March of 2018 after over half a century in business.

The Cupboard was one of the old independent natural food stores that for decades were the main source of food for the select–that is to say, vegetarians, “health food nuts,” and others who had caught on that real food is a lot better than artificial.

The times, they are a-changin’

When the Cupboard came on the scene in the mid-1960s, its popularity led to the closing of a small natural food co-op that preceded it.  The local appetite for natural foods wasn’t big enough to support two small stores. The Cupboard, virtually without competition, grew over the years and moved three times to larger quarters.

Things got bad, though, when two natural food chains opened locations in the neighborhood, and perhaps more importantly, when conventional supermarkets started putting in natural food sections replete with healthy sounding brands made by such health food stalwarts as Coca Cola and Nestle.

The demise of the Cupboard was bad news for us at Pure Water Products. We have had close ties with the store over the years. We had a popular (and profitable) water vending system in the store, plus filtration systems on ice machines, coffee machines, the cafe’s drinking water cooler, a produce preparation sink, and the misting system for the produce case. The store sent lots of customers our way. A good percentage of the store’s regular customers have our reverse osmosis units under their kitchen sink.  Fully half of our current employees worked at the Cupboard at one time. 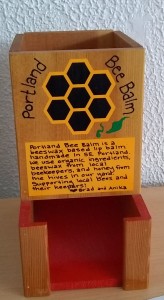 The very last purchase at the Cupboard before it closed forever was made by me. It’s a classy Portland Bee Balm display box. I can’t believe I was lucky enough to get it. The store sold out its merchandise at discounts that grew day by day, then sold its furnishings and equipment–even the light fixtures, and old adding machines that had been in a store room since 1991. On the very last day I laid down two quarters for the Portland Bee Balm box, which now holds pens and pencils on my desk. During the closeout I picked up a lifetime supply of 60% off tamari and olive oil, plus lots of things I never thought I would buy, like Umeboshi Plum Vinegar. I wish now I had tried Portland Bee Balm while I had the chance. Not likely I’ll find it at Kroger’s.