Water in China: Some Facts

The United Nations says China is one of 13 countries with extreme water shortages.

Strong economic growth has turned the country into the world’s second largest economy but at the expense of the environment.

The Yangtze River, once the lifeblood of the country, now flows a foreboding blood red, possibly due to industrial pollution.

To put things in perspective, China has 25 bathtubs of water per person. The U.S. has the equivalent of 125 bathtubs.

China now has around 300 million people with no access to potable water, resulting in some 66,000 deaths per year, according to the World Bank. It estimates the cost of water pollution to China at $22 billion, roughly 1.1 percent of the country’s GDP.

The Chinese government recognizes the problem and is seeking to cut water consumption by 30%.

China’s rapacious water consumption is in part boosted by an illogical scenario: water, while scarce, is unusually cheap. Water in China, in fact, is really three to five times cheaper than it should be. China is trying to reduce consumption by raising water prices, and this has been taking place slowly since 2009.

As with other areas, however, where public consumption becomes the focus of water saving efforts, in China the largest users and the largest polluters of water are industry and agriculture. They use about 85% of the water in China.

As with other countries, a simple step could save immense amounts of water: fixing leaky pipes. There are literally hundreds of millions of miles of pipe laid around the world that are leaking and wasting water. These are some simple fixes that we could do right away. 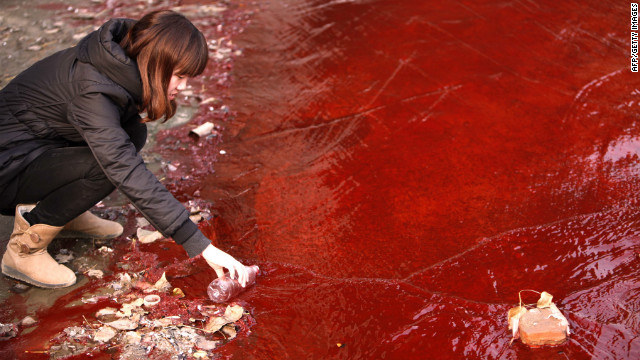 The Yangtze River, once the country’s lifeblood, has now turned blood red. Actually, what was first believed to be serious industrial pollution turned out to be red dye that entered the water as the result of a bag recycling operation.