As Canadian lakes have become more acidic, they’ve become increasingly dominated by jelly-like plankton that are throwing things out of whack, new research suggests. And these gummy invaders aren’t going anywhere. Soon, they could even disrupt the country’s water supply.

Years of industrial pollution have replaced the calcium that should be in Canadian soil with acid. Over time, as the drainage areas that feed the country’s lakes are leeched of their calcium, so are the lakes themselves. 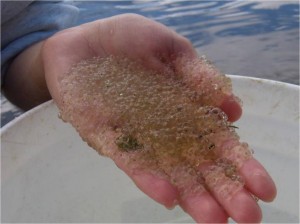 That’s bad news for the calcium-rich plankton (like the Daphnia water fleas) that used to thrive there. Research published recently in the Proceedings of the Royal Society B suggests that these plankton may be losing their turf to invaders less friendly to human needs.

Daphnia need calcium to build up their exoskeleton. Without it, they’re more vulnerable to predators, and their populations have been dropping. Meanwhile, the researchers report, climate change has caused oxygen levels in the lakes to decline as well. This makes for higher populations of larval midges, which are Daphnia’s main predators.

That’s allowed the opportunistic Holopedium to jump in, and the study authors report that populations of these gelatinous plankton have exploded in the past few decades. They only need a tenth of the calcium that Daphnia do, and are protected by their outer jelly capsules instead of by hard exoskeletons.

According to the researchers, Holopedium have been steadily increasing since around 1850 — around the same time that industrialization began.

Why worry about jelly lakes? The researchers believe that these plankton will continue to increase in number, and will eventually be numerous enough to clog up the extraction of drinking water. They also worry that the plankton will disrupt the food chain, eventually causing changes in the populations of other organisms.

“It may take thousands of years to return to historic lake water calcium concentrations solely from natural weathering of surrounding watersheds,” study co-author Andrew Tanentzap of the University of Cambridge said in a statement. “In the meanwhile, while we’ve stopped acid rain and improved the pH of many of these lakes, we cannot claim complete recovery from acidification. Instead, we may have pushed these lakes into an entirely new ecological state.”