Can the President Make Water?

Trump’s Pledge to ‘Open Up the Water’ for Valley Farms: Easier Said Than Done 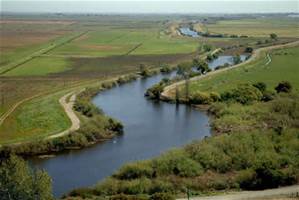 President-elect Donald Trump might have trouble living up to one of his more sweeping campaign promises in California.

On the stump in Fresno last May, he made headlines for declaring, “There is no drought” here.

It’s a bit unclear from his remarks whether he was voicing an opinion or simply reporting what some farmers told him at a pre-rally gathering. Either way, he was badly mistaken.

Though conditions have improved over much of the state since then, about 73 percent of California remains in some level drought, according to the U.S. Drought Monitor, and nearly 43 percent is still classified in “extreme” or “exceptional” drought, including much of the San Joaquin Valley.

‘Don’t Even Think About It’

But Trump also made a pledge to the assembled crowd in Fresno.

It’s unclear how much the candidate had thought about it as his comments displayed a blend of confidence and confusion. He expressed bewilderment at the current water allocation policies, which require that a certain volume of water remain in the rivers to protect the environment.

“You have a water problem that is so insane. And it’s so ridiculous, where they’re taking the water and shoving it out to sea,” he said.

Actually, a lot of people could’ve explained that. About a thousand of them were gathered in Sacramento this week for the Bay-Delta Science Conference, where scientists and policy makers meet every other year to review the latest research supporting the environmentally fragile Sacramento-San Joaquin Delta.

“This was more sloganeering than fact, in the middle of the drought,” observed Jeff Mount, a senior fellow at the Public Policy Institute of California. He says a certain amount of California’s river water must flow to the sea, to keep salt water from creeping in and contaminating both drinking water and farm land — especially during droughts.

“The share that went to the environment during the worst of the drought—2014 and 2015—was vanishingly small,” he recalls.

It’s unclear how high California’s water issues will actually rank on the Trump administration’s agenda, though anxiety rose in conservation circles last week when Trump gave a spot on his transition team to Devin Nunes, a San Joaquin Valley Republican congressman and vocal proponent of pumping more Delta water to farms. (Nunes floated a “Turn on the Pumps” bill in 2009 that failed in congress.)

“It will be uphill for [Trump] to make big changes here,” suggests Jay Lund, who heads the Center for Watershed Sciences at UC Davis. Like Mount, he’s a grizzled veteran of California water debates.

“There’s a lot of state law, state regulations that would have to be overcome,” says Lund. “I think pretty much anything that anyone wants to do is gonna get petty thoroughly vetted.”

Mount says an executive order from the White House to suddenly crank up the pumps would violate both state and federal law, beginning with the federal Endangered Species Act, which relies on formal studies known as “biological opinions” to set protections for sensitive habitat.

“He could write it, but it would be illegal,” wrote Mount in an email to KQED. “It would be inconsistent with the biological opinions, and the President cannot unilaterally alter the BOs. The project operators would run the risk of civil (and in a different world) criminal penalties.”

Mount says such an order would also run afoul of the Clean Water Act and California law, though in times of drought, even more fundamental laws apply to the distribution of water.

Campaign promises are one thing, says Mount, but, “Now they have to govern, and the laws of physics apply to everyone equally.”