Can Beavers Save California?

Leave it to beavers: California joins other states in embracing the rodent 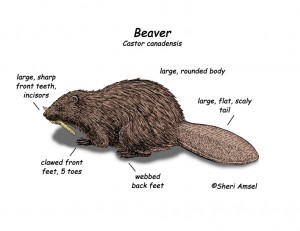 Californians are crossing their fingers for more rain after three punishing years of drought have left streams, rivers and wetland parched.

One animal has the potential to restore these dry landscapes.

With their industrial buck teeth and flat tails, beavers and their dams offer a defense against drought, a solution to reversing the effects of climate change. The rodents are known as ecosystem engineers. And they once populated most of California (and the Bay Area) until fur traders nearly wiped them out in the 19th century.

“This state has lost more of its wetlands than all other states, and beavers can rebuild those wetlands,” said Rick Lanman of the Institute for Historical Ecology in Los Altos. “Knowing that it is native should help guide restoration efforts.”

Beaver dams bestow benefits to the environment that we humans can’t easily copy. They turn land into a sponge for water. Their gnawing and nesting promotes richer soil and slows down water, improving imperiled fish habitat. Their dams raise water tables, nourishing shrubbery alongside streams that stabilize eroding banks and add habitat for birds and deer. They also help the endangered California Red-legged frog.

After beavers move to a new area, at night, they drag a tree across a shallow stream to start a dam. They carry rocks and mud with their paws and branches with their big incisors. Water in these beaver ponds would otherwise flow away. So it’s no surprise that thirsty western states are turning to the furry critters with open arms.

“There’s a growing interest in using beaver as a habitat restoration tool,” said Michael M. Pollock, an ecosystems analyst with the National Oceanic and Atmospheric Administration in Seattle. “They create good wetland habitat much more cheaply than other restoration methods.”

Government agencies are hosting a workshop series in a few western states and writing a guide on how to use beavers for restoration. California Fish and Wildlife is starting to embrace the beaver, a shift beaver advocates applaud.

“Our effort now is to show its many sides, sides that have always existed,” said Kevin Shaffer, a fisheries manager for state Fish and Wildlife. “We are investigating how beaver promote habitat and water conservation through their habitat manipulation. We are also creating public and scientific information about the beaver, its ecological role and current regulations and laws affecting its management and conservation.”

Other arid states in the West have comprehensive policies for managing beavers. California allows beaver to be hunted or relocated and killed if they cause trouble. Utah has a beaver management plan, and New Mexico recently mandated that its Fish and Wildlife come up with a plan too. Oregon, Washington and Idaho have relocation programs.

“It would be great if we could recognize the benefit of the beaver and to resolve conflict nonlethally and manage them to continue receiving those benefits,” said Kate Lundquist, director of the Occidental Arts and Ecology Center’s Water Institute, a group that is drafting beaver policy recommendations for state Fish and Wildlife.

So how would California look if beavers bounced back? A lot wetter, perhaps. Beavers once were an integral part of a vast network of wetlands throughout the state.

Locally, they range from Salinas to Sonoma County.

Given away by girdled willow branches, beavers live around the Lexington Reservoir and in Pescadero in the Santa Cruz Mountains. A mile-long stretch in the upper Los Gatos Creek has at least 10 dams. Parts of the creek have separated into beaver ponds, which provide needed refuge when flows are reduced from the reservoir up the mountain. The ponds are great rearing habitat for struggling young coho salmon and steelhead trout.

“Beaver ponds are beneficial because they also create a lot of wetland that provide a lot of food for fish,” Pollock said.

Beavers can also help reverse the rising temperatures of water, which can harm fish. The deep pools created by their dams have cooler water at the bottom.

“With a range of temperature conditions, fish are able to find the temperature that is ideal for them at a given time,” Pollock said.

Since beavers moved to the Alhambra Creek in downtown Martinez, the area has seen new species flourish. By moving mud, the beavers create a haven for bugs.

“Because we have an insect bloom, we have a bloom of all the different fish and animals up the food chain,” said Heidi Perryman, founder of the beaver 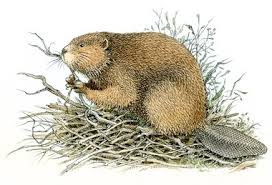 advocacy group Worth a Dam and who led the effort to save a Martinez beaver family from extermination. “We’ve identified three new species of fish and seven species of bird. And we see more otter and mink than we ever saw before.”

In San Jose, a beaver has taken refuge in the dry Guadalupe River. The critter’s dam outside a dripping storm drain created a tiny oasis.

“They can get by with very little,” Pollock said. “In a number of cases, they’ve built on streams that have run dry and because they have built the dams, water flows again.”

Because beavers are so good at recharging ground water, they can make streams flow when they would otherwise run dry such as during the summer months.

California called on beavers to prevent erosion from the 1920s and 1940s in nearly half the state’s counties, including those in the Bay Area and Santa Cruz, according to a recent paper proving that beavers are native in nearly all of the state. The beaver population grew from less than a thousand to 20,000 by 1950. No one knows today’s population.

A beaver family can improve damaged land at a cheaper cost, but restoration isn’t as simple as moving in a beaver family. They can inflict serious destruction on culverts and agriculture lands as well as flood homes and other urban areas.

State Fish and Wildlife is experimenting with artificial beaver dams to avoid moving the animal and the damage they can cause.

Still, some other Western states are reintroducing beavers to help mitigate problems related to climate change. California is on its way.