—[Capital punishment] has no redeeming social value. It’s no deterrent to crime. It just teaches our children to hate.–Julie-Marie Welch, speaking to her father shortly before her death at age 23 in the Oklahoma City bombing.

It is easy to keep to one’s principles when things go our way.  But when things turn bad, few have the Job-like strength to stick to what they know is right in spite of the pain.

Bud Welch, an Oklahoma City gas station owner, lost his only daughter Julie-Marie in the 1995 bombing of the Murrah Federal Building.  Julie-Marie was the center of his life.  She was a happy, intelligent young woman, who studied several foreign languages and was working as an interpreter for the Social Security Administration when the Timothy McVeigh’s bomb ended her life.

When Julie-Marie was killed, Mr. Welch, now 61, says that for ten months his grief and rage were unbearable. “I was so damn full of rage and vengeance that I drank myself to sleep every night,” he said.

Although he later paid a lengthy visit to McVeigh’s family and offered condolences to his father and sister, Mr. Welch says that he has not yet been able to forgive the man who killed his daughter. Speaking at Harvard University, he said:

Every Wednesday at 11:30,  I’d meet my daughter Julie-Marie for lunch at a Greek restaurant across the street from the Murrah building. She spoke five languages and translated Spanish for the Social Security office there. But on Wednesday, April 19, 1995, I never got to have lunch with Julie-Marie. I miss her so–her smile, her kindness. She was only 23.

As far as the death penalty is concerned, it won’t help me any when Tim is killed. The death penalty is about revenge and hate, and I know there are people sitting around this table right now that profess to be Christians. If we’re going to truly follow Christ, as I feel like I try to do, I think we must ask ourselves this one question about the death penalty: “Would Jesus pull the switch?” I don’t think that he would, because Jesus stopped an execution, when he said, “Let those who are without sin cast the first stone.”  I think Ghandi put it very well about the Old Testament–“An eye for an eye leaves the whole world blind.”  (For the full text go to http://www.mvfr.org/harvard.html.)

On another occasion, Bud Welch said:

I fear for our country. We need social change on the death penalty–just as we needed social change in the 1800’s with slavery. We moved from abolishing slavery, to granting women the right to vote, to passing civil rights laws. We finally made these necessary social changes and we must take the next step with the death penalty. Do not allow fundamentalist religious groups to control our social agenda.

Speaking in Colorado before an Amnesty International gathering,  Welch delivered the following address.  At that time, the McVeigh execution was scheduled for May 16, 2001. 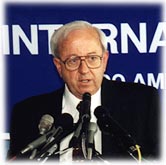 To my friends and fellow abolitionists who will be in Terre Haute for the state sanctioned killing of Timothy McVeigh, or at other protests around the country, I want you to know that my prayers are with you. I believe that a statement should be made.

I ask you to be my voice on May 15 and 16, 2001. I urge you to send a clear message to our Government–and to the people of this nation–that what we are embarking on on May 16 is just plain wrong. Our society should not tolerate a government with the power to kill its own citizens. Send that message in whatever way you feel is appropriate, with compassion, with nonviolence, and in peace.

When my daughter, Julie, was killed, I joined a “club” that I wish had no members: The price of admission is too high. I know the pain of losing a loved one because of a senseless act of violence. On May 16, 2001, I will stand with other families who have lost loved ones to unnecessary violence, and I will be with Tim McVeigh’s family as they prepare to be victimized in a political event, staged by the Government of these United States.

Americans must be made to understand that in Tim McVeigh’s mind, he was engaging in an act of revenge when he bombed a United States installation. In his mind he was at war, and much the same as when we bomb Iraq or send more than a billion dollars in weapons to Colombia, innocent civilians die and countless lives are changed forever. The “collateral damage” from McVeigh’s “war” or any other is the same: Innocent people die.

Of course McVeigh’s thinking was horrifically wrong. I am simply saying that we must attempt to understand his mind set, and recognize that WE must choose to stop the cycle of violence! Killing Tim McVeigh only continues the violence. And, killing McVeigh makes him a martyr in the eyes of those who supported him and share his beliefs. We should not be surprised if one or more of his supporters tries to avenge our killing McVeigh. We should ask ourselves: How much killing and how much revenge are we prepared to live through?

I fear for our country. We need social change on the death penalty–just as we needed social change in the 1800’s with slavery. We moved from abolishing slavery, to granting women the right to vote, to passing civil rights laws. We finally made these necessary social changes and we must take the next step with the death penalty. Do not allow fundamentalist religious groups to control our social agenda.

To the media, I implore you: Respect everyone who is suffering through this ordeal. Please be fair and accurate in your reporting. And please respect me, the other victims families, the survivors, and Tim’s family.

The Pure Water Gazette is honored to add Mr. Welch to the recipients of its Hero Award.