Home of British fishing ‘being destroyed by chemicals in cleaning products’ 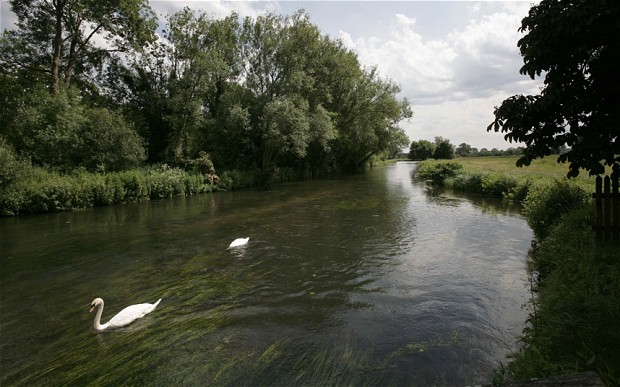 The River Test. The rivers Test and Itchen, famous for their fly fishing, have been found to contain dangerous levels of phosphorus.

The home of British fishing is under threat of destruction from chemicals found in dishwasher tablets, experts have warned.

Chalk streams which feed into the rivers Test and Itchen have been found to contain alarmingly high levels of phosphorus.

The element can act as a fertiliser, accelerating the growth of weeds and murkying the clear waters which flow through Hampshire.

The two rivers – both classified as Sites of Special Scientific Interest and famous for their high quality fly fishing – are regarded as the finest chalk streams in the world.

The Test – which has even attracted former US President George Bush Snr to its banks – is known as the “Mecca” of the sport and is thought to have been popular since the 1880s.

The Environment Agency said the Itchen failed a recent chemical quality test, and officials expect it to fail again in 2015. This now puts the river in the “at risk” category.

The issue was discussed at the Chalk Stream Headwaters Forum, in Winchester, Hants, this week.

Dr Steve Rothwell, from the Vitacress Conservation Trust, said: “The UK is unusual in Europe because many EU countries long ago banned detergent products with phosphorus and the UK never has.

“In Hampshire phosphorus is a big problem. You get too much algae growing in the rivers as a result and it starts to out-compete the other plants you want.

“We know septic tanks are a problem. The chalk streams are so clear because they lack phosphorus, but if you add any it’s like adding fertiliser and you get all this growth.”

Birmingham University academic Alex Poynter, who has researched the issue for Hampshire and Isle of Wight Wildlife Trust, said the number of cleaning products in the UK containing phosphorus is “quite scary”.

The problem is made worse in rural areas because many homes use private drainage, and pollutants can find their way into rivers from septic tanks.

Agricultural run-off, with fertilisers washed off the land and into rivers, also contributes to elevated phosphate.

Graham Roberts, from the Hampshire and Isle of Wight Wildlife Trust, called the condition of the Itchen “disgusting”.

He said: “No water should be discharged with a quality worse than when it was abstracted. This is not an unreasonable aim to have.

“This is a real menace and changing the whole ecology of the river. It’s not rocket science, and needs to be sorted.

“I have had 27 phone calls and over 109 emails recently, particularly pertinent to the River Itchen.”

There are 161 chalk streams in Britain – 95 per cent of the world’s total – and most are located in the south-east of England.

An article on the fishing website fishpal.com describes the Test and Itchen as “stunning”.

It says: “Both rivers are stunning and hold any number of opportunities for visiting fishermen for most of the year, keen to enjoy the experience of challenging, exciting fishing on gin clear streams.”

The 39-mile-long river Test rises from the Upper Chalk near the village of Ashe, drains 480 square miles, and average annual rainfall of 32 inches.

Water quality in its upper reaches is so good that it is used for washing and processing paper used in the production of British banknotes.

The 28-mile-long Itchen rises from the upper chalk near New Cheriton, has a catchment area of 280 square miles, and an average rainfall of 34 inches.