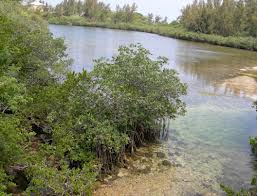 The basic process of treating brackish water in desalination applications is to pass pressurized water through a membrane. As fresh water passes through the membrane, brine or wastewater is rejected.

Typically, the pressure needed ranges in brackish water treatment from 5 psi to 75 psi, although the majority of brackish applications fall in the 145 psi to 290 psi range.

Brackish water is generally a surface-type water and as such can be influenced by such environmental factors as rainfall and humidity.

Ion levels and bacteria could be higher in the summer months compared to winter months, and salinity, nitrates, iron, silica and bacteria are a few examples of what is common in untreated brackish water.

Viewed another way, brackish water is water that has more salinity than fresh water, but not as much as seawater. It may result from mixing of seawater with fresh water, as in estuaries, or it may occur in brackish fossil aquifers. The word comes from the Middle Dutch root “brak,” meaning “salten” or “salty”.

Technically, brackish water contains between 0.5 and 30 grams of salt per litre—more often expressed as 0.5 to 30 parts per thousand (ppt or ‰). Thus, brackish covers a range of salinity regimes and is not considered a precisely defined condition. It is characteristic of many brackish surface waters that their salinity can vary considerably over space and/or time.

Here is a chart from the Wikipedia:

If you prefer to think of this in parts per million, as is most common in water treatment, multiply the numbers in the table by 1,000.

In summary, brackish water lies in definition somewhere between fresh water and sea water and is defined mainly by its salt content.

Treatment is almost exclusively by membrane technology (reverse osmosis) or by distillation.