Bermuda Dunes, once the home of Clark Gable, tops the list of places using too much water in the drought-plagued Golden State 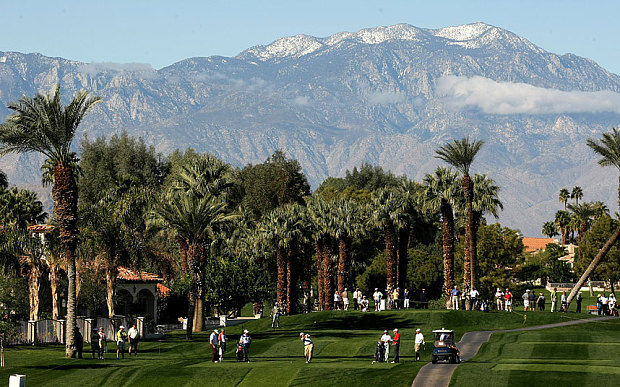 A wealthy town of 6,000 people has been named the worst offender in California for guzzling water as the state tries to crack down on wastefuless during a crippling four-year drought.

Bermuda Dunes, an oasis in the Coachella Valley 120 miles east of Los Angeles, uses 343 gallons of water per head per day.

That compares to 139 gallons in Los Angeles, which itself uses twice as much as the average city in Europe.

Bermuda Dunes, which sprang up out of the desert in the 1960s, has 354 days of sunshine a year and receives less than three-and-a-half inches of rain annually.

It is home to the lush Bermuda Dunes Country Club, has its own airport, and Hollywood star Clark Gable once lived in one of its large homes.

Conservationists have called the use of water in the area a “crime” and “unsustainable” and the situation could become worse as summer approaches.

Under plans recently announced by California governor Jerry Brown the state is trying to reduce water consumption by 25 per cent.

The 400 water companies in California have been ranked on how much water is being used by their customers, and different levels of cuts have been imposed.

Myoma Dunes Mutual Water Company, which supplies Bermuda Dunes, ranked number one, and was told to make the maximum 35 per cent cut.

Two other much bigger water companies which supply larger towns in the Coachella Valley, were also in the top 10 of California’s per capita water users, and were issued with 35 per cent targets.

In the Coachella Valley, within striking distance of Bermuda Dunes, there are more than 120 golf courses which attract players from around the world.

Their artificial lakes and green fairways use a quarter of the water being taken from rapidly depleting wells.

Other offenders are the sprinklers used to maintain residential lawns.

According to residents there is still overflow water from sprinklers running down roadside gutters.

Richard O’Donnell, a retired architecture professor who has got rid of his own lawn in Bermuda Dunes, told The Desert Sun newspaper: “The use is obscene. People just don’t have the consciousness of the water and where it comes from. There’s so much apathy about the use of water.”

Water companies have argued that up to a third of their customers own holiday homes in the area, and are only there seasonally, but many leave their sprinklers on while they are away.

The identification of Bermuda Dunes as the biggest per head user of water is part of a new trend in California known as “drought shaming” in which neighbours use social media to criticise water wasters.

Last week the trend extended to celebrities as the New York Post published aerial photographs of their lawns.

A representative for Barbra Streisand, whose lawn in Malibu was featured, said she had already cut water usage by over 50 per cent and “is going to take further steps to conserve water”.