How about a bath instead of a workout?

There could be more benefits than relaxation and clean skin. 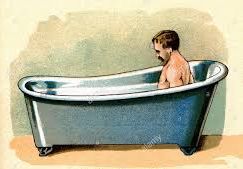 According to a recent U.K. university study, “An hour-long hot bath can boost metabolic health and cause an anti-inflammatory response similar to exercise.”

It was a small study with surprising results: Ten sedentary men, attached to glucose monitors (which recorded changes in their blood sugar for 24 hours) bathed in 104-degree water one day. The next day, they cycled hard enough to bring their body temperature up by about a degree, which is what also happens in a hot bath.

The bathers burned an extra 126 calories per hour (equivalent to a 25-30 minute walk). That was still less than the energy used for cycling the same amount of time, but was an 80 percent increase in energy expended over not bathing.

In addition, participants who bathed had, on average, 10 percent lower peak glucose levels — a boon for diabetics, but also good for the metabolic health of those who don’t have the disease. The finding was unexpected, according to the lead author of the study: “We think the reason is that the bath may encourage the release of heat shock proteins, which may help lower blood sugar levels by improving insulin controlled glucose uptake.”

In many cultures and throughout many centuries, hot bath (or saunas and steam sessions) have long been praised as important for overall wellness. Now scientists are starting to understand the underlying reasons for the health benefits of bathing, which might be regarded as a passive workout. Clearly, there are many benefits from physical activity that you don’t get from bathing, so soaking in a tub should not be regarded as a substitute for exercise, but it can be a healthful addition to your daily activities.

Vitabath tablets use plain old vitamin C to remove chlorine and chloramine from bath water and can increase the health benefits and enjoyment of a bath.