A Common Sense Look at Bacteria and Water Filters

In A Nutshell: An unqualified fringe of the water treatment industry has spread the myth that carbon water filters are breeding places for dangerous bacteria.  Not so.

Bacteria are everywhere.  A high percentage of your own body consists of the bacteria that live within you.  When you eat a fresh salad, it is literally teeming with bacteria.

Most bacteria are not only “friendly;”  they are essential to our well-being.  As  with most other areas of our world, however, it is the occasional bad actor that gets all the attention. The discovery of E. coli in a sausage factory is the lead story on the TV news, but news reports that sing the praises of the bacteria that live in your large intestine and make the digestion of food possible are scarce.

For each of the few disease producing bacteria that can live in the human body, hundreds of others are necessary for our existence.

Bacteria help us digest our food, for example–otherwise, we’d starve.

The bacteria that do harm are called  pathogenic.  Pathogenic, or disease-causing bacteria are responsible for such diseases as cholera, typhoid fever, infectious hepatitis, dysentery, and gastroenteritis. Modern water treatment methods have done an excellent job of keeping pathogenic bacteria under control in most advanced societies.

The bacteria we hear most about is E. coli (which stands for Escherichia coli). E. coli is found in the intestines and in 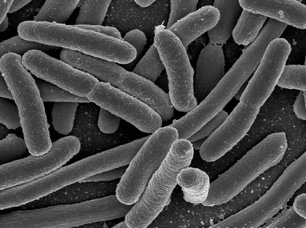 Rod-shaped E. coli usually measure about 2 microns long and half a micron across. This makes them big enough to be caught by a tight water filter.

the fecal matter of humans and animals, so when E. coli  is found in water, it usually indicates that the water supply has been contaminated from sewage. E. coli might get into the water supply, for example, through a broken well casing, a ruptured supply line, or runoff from a septic system or dumped sewage. E. coli is of significance mainly as an indicator bacteria. E. coli itself is most often non-pathogenic, but its presence indicates that more dangerous fecal bacteria are probably around. E. coli is always present in humans, and normally a newborn baby’s intestines are inhabited by E. coli within the first 40 hours of life.

Modern water treatment has had great success in the control of pathogenic bacteria.  The leading strategies are chlorine (or chloramine) to treat public water supplies, plus ultraviolet, ozone, very tight filtration,  and other chemicals like hydrogen peroxide or potassium permanganate in other venues.

Harmless and usually helpful bacteria outnumber the pathogenic.  These can be found everywhere, and one of their favorite places to live is in the moist, dark recesses of the carbon inside a water filter.

The bacteria that grow in carbon filters, usually called heterotrophic bacteria (or HPC), are naturally occurring bacteria which usually have no consequence for human health. Numerous studies have shown them to be harmless to humans.  HPC are found also in trace amounts in public and bottled water as well as on fresh fruits and vegetables.

HCP can grow in carbon beds,  and they may be found in reverse osmosis units downstream of the initial dechlorinating filter. Although their presence can be something of an aesthetic nuisance, forming a slickness on the surface of filter cartridges, for example, they pose no threat to health.  They may, in fact, inhibit the growth of harmful bacteria and be useful in other ways.

Why, then, the persistent myth that water filters are writhing nests of dangerous bacteria waiting to strike us down? In my opinion, the bacteria issue that troubles many water filter owners is a lingering result mainly of marketing misinformation that was spread by overzealous amateurs bent on selling “bacteriostatic” water filters.  Multi-level marketers of the 1980s and 1990s  were sent into the world  preaching the virtues of silver-impregnated carbon in “bacteriostatic” water filters; their main message was that the standard carbon carbon filters being sold by everyone else were dangerous breeding beds for bacteria.  More recently, sellers of mixed bed carbon and KDF (also a “bacteriostatic” agent) filters have kept the myth alive in a more subdued way.  (Bacteriostatic, by the way, does not mean that the filter kills dangerous pathogens in the water, making unsafe water safe, but simply that it inhibits the growth of bacteria within the carbon bed.)

When did you last hear a news report about a disease epidemic that was spread by pathogens growing inside  water filters?

The water treatment systems that are used in homes to remove disinfectants, chemical contaminants, and heavy metals while improving the aesthetics of the water are not designed for use on non-potable water.  They are used on water that is pathogen free.  It is unreasonable to fear that pathogen-free chlorinated city water will somehow introduce dangerous microbes into a water filter where they will grow and flourish.

If the presence of bacteria is a concern, or if you have strong reasons to protect yourself from all bacteria, good or bad, it’s easy to install a ceramic filter as the final stage of your drinking water filter or reverse osmosis unit.