B. Bee Sharper on Dogs, the Enemies of Clean Water

Numerical Wizard B. Bea Sharper ferrets out the watery facts that Harper’s misses 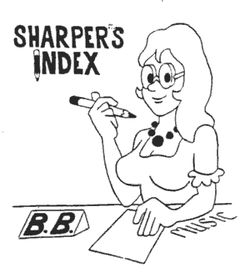 Dog droppings and other compelling problems.

Estimated percentage of these dogs that are in the country illegally– 23.9%.

Length in miles of the caravan made by these 267,500 manure wagons if they were lined up bumper to bumper–3800.

Percentage of Americans who tested positive for roundworms in a CDC study – 14%.

Number of canines required to generate enough bacteria in three days to close 20-miles of beach –100.

Percentage of US households that have at least one dog–60%.

Numerical rank of dog waste among the largest contributors of bacterial pollution in urban watersheds– 3 or 4.

According to a Seattle study, the percentage of watershed pollution that can be attributed to dog wastes–20.

Average daily output in pounds of feces per day per dog–3 to 4.