The U.S. Geological Survey estimates that commercial, residential and industrial buildings use approximately 47 billion gallons of water each day. And the EPA found that a typical office building uses more than 25 percent of its water supply for cooling towers.

In most large commercial and industrial buildings, tens of thousands of gallons of water flow through a big apparatus called a cooling tower (about the size of a two-car garage, they’re usually on the roof), where it evaporates out the top. 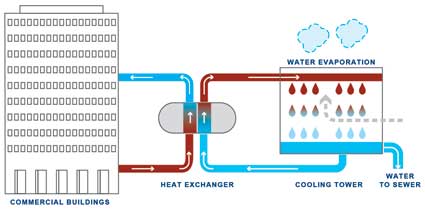