In a Nutshell: As buried water pipes age, the occurrence of unexpected  sinkholes becomes more common. We often forget that we are living on top of a maze of underground waterways and that these hidden streams are held together by materials that are not eternal.  When an ancient underground river breaks out of its banks, it can create a hole that swallows large objects like automobiles.

The hole — which had already swallowed two vehicles before claiming Giwa’s car —was not caused by the rain but by a break in an aging water main, officials later said. 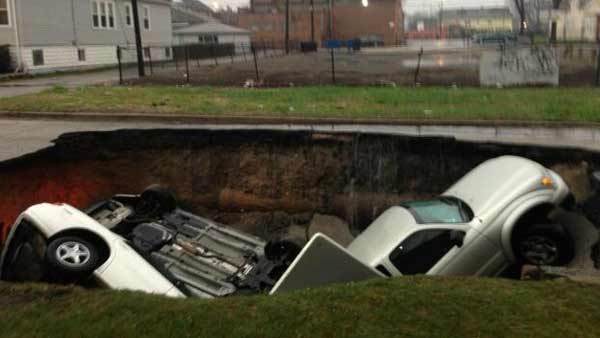 Witnesses said the hole opened up in the 9600 block of South Houston Avenue about 5 a.m. and eventually was the entire width of the street.

Two vehicles fell in first, a parked car and then a silver pickup truck driven by Mirko Krivokuca, who lives on the next block and was driving to work.

Krivokuca was taken to Northwestern Memorial Hospital for “a couple of scratches,” his father, Petar Krivokuca, said as he stood in the rain , staring in disbelief at the massive hole.

Ola Oni said she was about to leave for work when her parked car dropped into the hole. She was just glad she wasn’t in it.

Giwa, too, had been about to go to work when she saw the sinkhole and ran back into her son’s home to call police. First responders arrived and told her not to go near the hole, she said.

Less than an hour later, the strip of concrete where Giwa’s car was parked caved in. Her car rolled upside down into the expanding hole.

A fourth vehicle was towed from the edge as it was about to fall in, witnesses said.

“I was really upset,” Giwa said later as she flipped through the pictures she’d snapped that morning. A few captured her shiny white car sitting next to the hole. The last showed an empty space where her car had been.

“I’m looking at my car going in the hole,” she recalled.

The sinkhole was caused by a water main dating from around 1915 that gave out and breached the sewer below, city Water Department Commissioner Thomas Powers said.

“As the water was flowing from the broken main, it undermined all of the soil underneath the pavement and washed it into the sewer,” Powers said.

Ald. John Pope, who represents the 10th Ward where the hole appeared, said the rainy weather “certainly (hadn’t) helped” the situation but that aging infrastructure was to blame for the street’s collapse.