Bathing in Well Water With Arsenic 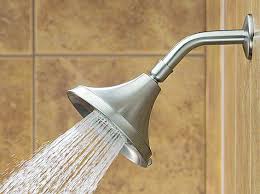 Is it safe to shower in water that is contaminated with arsenic?

Dr. Kelly A. Reynolds in a December 2016 Water Conditioning and Purificication article on arsenic got my attention in her beginning  paragraph: “Exposure to arsenic via inhalation, ingestion and skin absorption can lead to cancers of the lung, bladder and skin.” I took note because I have been advising our customers for some time that arsenic in well water is mainly a drinking water issue and that there is little or no evidence that exposure to arsenic through bathing in water that is a few parts per billion over the current recommended limit of 10 parts per billion has any serious health consequences. Consequently, when a well water  customer calls or writes with an arsenic issue, we usually recommend taking care of the drinking water, which is easy and not too expensive, and forgoing the much more costly, complicated and often unreliable whole house treatments for arsenic.
Arsenic is serious business and I don’t want to get it wrong, so I did some internet research on the topic: does arsenic, in fact, enter the body through the skin and can it be breathed in during showering?

Most authorities who address the issue of the uptake of arsenic through the skin are pretty clear on the issue.  Here are some examples:

Unless your arsenic level is over 500 ppb, showering, bathing and other household uses are safe. Arsenic is not easily absorbed through the skin and does not evaporate into the air. — Mass.gov. (A publication of the Commonwealth of Massachusetts Office of Energy and Environmental Affairs) [Five hundred parts per billion is 50 times the EPA recommended allowable.]

Only a minimal amount of arsenic is absorbed through the skin.–   Virginia Dept. of Health.

Arsenic is not easily absorbed through the skin. — Maryland Dept. of Health.

For most people, the largest source of arsenic is in the food we eat. Most foods, including vegetables, fish, and seafood, contain some arsenic. Arsenic in groundwater can enter the body by drinking the water or by eating food cooked in the water. Arsenic does not evaporate into the air and is not easily absorbed through the skin. — Illinois Dept. of Public Health.

If your skin contacts soil or water containing arsenic, only a small, harmless amount will enter your body. — Delaware Health and Social Services.
If levels of well water are above 500 parts per billion, you may want to stop using it for bathing, cooking and washing clothes. —North Carolina Dept. of Public Health and Human Services.

Generally speaking, the main routes of contamination for people who are not exposed to arsenic in their work (occupational exposure) are drinking water first, followed by food. Absorption through the skin seems to be minimal, so arsenic exposure through hand washing, laundry, bathing, etc. is not considered to be a problem. — University of Maine.

Neither the National Research Council (1999) or the Agency for Toxic Substances and Disease Registry (2000), nor the additional literature searches, identified any controlled studies of inorganic arsenic absorption through human skin. New Jersey Department of Environmental Protection.

Historical studies indicate that skin absorption of arsenic is negligible,  so handwashing and bathing do not appear to pose a known risk to human or animal health.  Greg Reyneke, MWS, Water Conditioning and Purification Magazine, November 2021.

No source is cited for the “well absorded through the skin” statement and the end-of-sentence footnote links only to the entry page for a pay-to-use website. Although it is not specified, the admonishment seems to be aimed at arsenic poisoning via industrial pollution rather than water.

In spite of Dr. Reynolds’ statement and other occasional dissenting views, I still feel good about my standard  recommendation to customers with wells a few ppb over the recommended maximum of arsenic to fix their drinking water and leave the rest alone. As the picture above would suggest, however, if there is arsenic in your water common sense precautions should be taken.

A brief article on how to remove arsenic from water.