The Ten Most Endangered Rivers in America, and What Put Them on the List

Now in its 26th year, the American Rivers Most Endangered Rivers List includes not necessarily the nation’s most polluted rivers, but those “at a crossroads, whose fates will be determined in the coming year.” Here’s the current list, along with the circumstances that threaten their existence.

1. The Susquehanna River of Pennsylvania, tops the endangered list because it flows through the Marcellus Shale natural gas extraction area.

2. The Nushagak and Kvichak rivers that flow into southern Alaska’s Bristol Bay are threatened by a proposed mining operation.

3. The Roanoke River flows from the Blue Ridge Mountains in Virginia to North Carolina’s Outer Banks. Along the way, it provides drinking water to more than one million people in Virginia Beach, Norfolk, and other communities. It, too, is threatened by the natural gas extraction method called fracking.

4, The human-made Chicago River, which flows through the heart of the city, is theated by the dumping of 1.2 billion gallons of un-disinfected sewage every day. The effluent, in fact, comprises 70 percent of the water in the Chicago River system.

5. The Yuba River begins in California’s Sierra Nevada Mountains and ends in the Sacramento Valley. In addition to supplying drinking water to 480,000 residents and irrigating thousands of acres of farmland, the Yuba provides critical habitat for wild Chinook salmon and steelhead. The ecological survival of the river is threatened by two  Army Corps of Engineers dams—one built in 1946 and the other in 1906.

6. Western Wyoming’s Hoback River begins with springs, seeps, and wetlands in a roadless area of the Bridger-Teton National Forest and ends in an 8-mile (13-kilometer) stretch that was designated as a Wild and Scenic River in 2009 for its untrammeled character and its wildlife, including a thriving population of native cutthroat trout. But a proposed industrial-scale natural gas drilling operation could inject toxic chemicals, including known carcinogens, into the ground that would threaten the ecosystem and local drinking water supplies.

7. The Green River flows from Mount St. Helens National Volcanic Monument to the Toutle River, eventually converging with the Cowlitz River in southwestern Washington. Along its path, the river supplies drinking water to 50,000 residents in three communities.A Canadian corporation recently started exploratory drilling for a copper mine near the headwaters of the Green River, and mining operations place the river in jeopardy.

8.  The Black Warrior River and its tributaries are a major drinking water source for the communities of Birmingham, Jasper, Cullman, and Tuscaloosa in northern Alabama.  The river is threatened by relaxed coal mining regulations by the Army Corps of Engineers.

9. The famously beautiful Ozark National Scenic Riverways could crash under the weight of their own popularity, according to American Rivers’ annual list.  Together, the riverways host more than 1.3 million visitors a year. ” In the past 30 years, 13 developed river access points and public campgrounds have expanded to more than 130, connected by mazes of unmanaged dirt roads that bleed suffocating sediment into the river,” according to American Rivers.

10. The St. Croix River begins in northwest Wisconsin and flows south, forming the border of Minnesota and Wisconsin and joining the Mississippi River near the Twin Cities. The main threat to the river is  U.S. Representative Michele Bachmann, of Minnesota, who has introduced a proposal to Congress to replace the Stillwater Bridge over the St. Croix with a four-lane freeway-style bridge that environmental groups say will would harm the river’s scenic and recreational values, set a poor precedent for other Wild and Scenic Rivers, and cost taxpayers up to $690 million in tough economic times.

And finally, honorable mention, to the might Mississippi, which did not make this year’s list and keeps on rollin’ along in spite of endless human abuse. 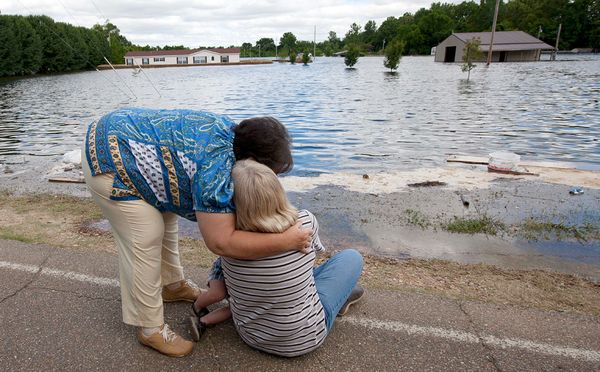 The Mississippi did not make the current list of ten most endangered rivers.

For great National Geographic pictures of the ten most endangered rivers.