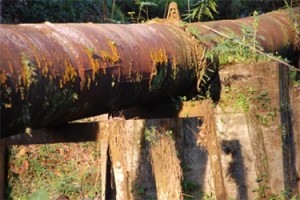 Water Online writer Sara Jerome, in her article “Small Town, Big Water Problems,” says that in the small Louisiana community of Enterprise, the tap water is so bad that “one woman drives 20 miles each way to do her laundry in another town.” The water situation in Enterprise illustrates a festering problem in the United States: Funding for infrastructure repairs and upgrades in small communities is hard to come by.

“Years of water system neglect means that the 250-or-so residents there are left with pipes that leak more than 70 percent of their water into the ground — all because they can’t afford to fix them,” CNN reported, citing John Tiser, resident and water board president.

But Enterprise is hardly alone.

Virginia Tech Engineering Professor and water expert Marc Edwards refers to it as America’s “dirty little secret.” He explains that oftentimes towns like Enterprise are stuck with aging infrastructure that they can’t fix, leaving few options for them to deal with complaints about dirty or contaminated water. Edwards received a nearly $2M grant to uncover water issues in towns like this.

When Edwards and a scientific team tested Enterprise’s water in 2017, they found bacteria, lead and other contaminants that exceeded EPA limits.

“The whole idea is, at the end of this, to come up with a model to predict which cities are likely to have problems,” Edwards said. “Which cities are most likely to have lead pipes, and not be following the rules, and then work with communities there to figure out if they do have a problem, then build algorithms for individual homeowners to protect themselves, from sampling to filters.”

It is important to point out that while “over 92 percent of U.S. residents who receive water from community water systems are supplied by water that meets health-based standards at all times,” the U.S. EPA estimates that over $743B is needed for water infrastructure improvements.

To illustrate the extent of the water problems that plague small U. S. systems, here are more Water Online articles:

Authorities Target Water Operator Over Lead Crisis In Ohio. Ohio authorities filed charges against a water operator last week, alleging that he failed to alert residents about lead levels in the village of Sebring, where tainted tap water has triggered elevated lead levels in children.

18 Million People Served By Systems With Lead Violations. Public officials have often failed to step in when water systems violate the federal Lead and Copper Rule, according to a report released this week by the advocacy group Natural Resources Defense Council (NRDC) on the “extraordinary geographic scope” of lead contamination.

Are The Dangers Of Iron In Water Being Ignored? Iron in drinking water may pose more health risks than federal water regulators currently acknowledge.