As Summer Heats Up, Algae in Lakes Cause Concern

As summer temperatures rise, the presence of algae in some surface waters in the US has increased. Not all algae produce toxins that affect public health, but increased growth in recent years of  harmful algal blooms is triggering some concern.  Last August, a major algal bloom in Lake Erie caused the city of Toledo, Ohio, to issue a “do not drink” order for more than 400,000 residents.  The EPA estimated in 2009 that  20 percent of the nation’s lakes are highly impacted by algae, and one-third contains some level of harmful algae.

In response to the rise in harmful algae in lakes, the  EPA determined toxin levels in tap water that are safe for human consumption and offered recommendations for how utilities can monitor and treat drinking water for algal toxins and notify the public if the water exceeds these levels. 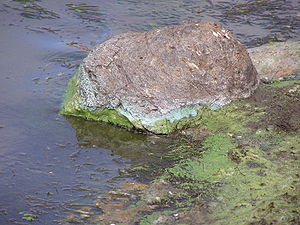 Algae are found naturally in lakes, streams, ponds and other surface waters. When conditions are favorable, they multiply rapidly and cause a “bloom” characterized by a pea-soup green color or blue-green scum. Their nature can be affected by the intensity of sunlight, water temperature, nutrient availability (especially nitrogen and phosphorous), pH, and water movement.

Most algae are not harmful. Last year’s Toledo algae scare was due to fresh water algae known as cyanobacteria, often called blue-green algae.   Cyanobacteria proliferate in stagnant or slow-moving bodies of water with high levels of nutrients — nitrogen and phosphorous — often due to agricultural runoff or wastewater. When the ecosystem becomes unbalanced, non-harmful algae are often replaced by cyanobactria.

These fresh water algae can produce cyanotoxins, one of the more harmful types of algal toxins.

Cyanotoxins can cause health problems primarily affecting the nervous system, liver or skin. If present in recreational water or drinking water at high enough levels, a wide range of symptoms may occur — including fever, headaches, muscle and joint pain, blisters, stomach cramps, diarrhea, vomiting, mouth ulcers and allergic reactions. These symptoms can occur immediately or several days after exposure.

When cyanobacteria are present in a water source, the preferred strategy is to remove them from the water before toxins are released. This can be accomplished through processes such as dissolved air flotation. However, the best approach is to prevent the growth of algae that can produce the toxins through watershed management.

Many solutions are available to treat algal toxins. Disinfectants and oxidants such as chlorine, chloramine, ozone, ultraviolet (UV) and chlorine dioxide are frequently used in standard treatment facilities. Most algal cells can be removed by chlorine disinfection, in addition to coagulation, sedimentation and flocculation. Removal of the toxin is more difficult. Many standard water treatment strategies are used with some success.  These include granular activated carbon (GAC), ozone, advanced oxidation processes, nanofiltration and reverse osmosis (RO). At present there is no single recommended treatment for algal toxins.

Algae in water sources is, of course, of interest mainly as a public water issue. Point of use treatment for residential water has been infrequently considered, but the standard techniques of carbon filtration, chlorination, and reverse osmosis would seem to be the obvious final barrier strategies.