In a Nutshell:  China’s Yellow Sea is turning green with massive growths of algae, which clog beaches and suffocate marine life.  Industrial and agricultural discharges of nitrates and phosphates are the suspected cause. The algae blooms are harmless to humans and swimmers don’t seem to mind them.

The largest algal bloom ever recorded in China has turned the Yellow Sea green and may be related to pollution from agriculture and industry.

Officials in the city of Qingdao had used bulldozers to remove 7,335 tonnes of the growth from beaches according to the Xinhua news agency.

The phenomenon has become an annual occurrence in the region over the past six summers. This year’s incident has swathed 28,900 sq km (11,158 sq miles), twice as much as the previous biggest bloom in 2008.

The algae, called Enteromorpha prolifera, is not toxic to humans or animals.

However the carpet on the surface can dramatically change the ecology of the environment beneath it. It blocks sunlight from entering the ocean and sucks oxygen from the water suffocating marine life. 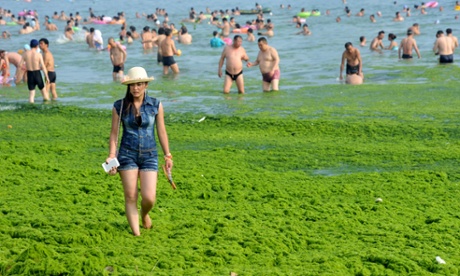 Tourists at a beach covered by a thick layer of green algae in Qingdao, China.

The algae thrives on an abundance of nutrients in the sea. University of Cambridge and EnAlgae Project researcher Dr Brenda Parker said that the Chinese bloom may well be linked to industrial pollution.

“Algal blooms often follow a massive discharge of phosphates or nitrates into the water. Whether it’s farming, untreated sewage or some kind of industrial plant that is discharging waste into the water,” she said.

The recent explosion of the algae pointed to a dramatic change in the ecosystem which was probably not natural.

“That would probably be an indicator that something is a little bit unbalanced,” said Parker.

She said that the 2009 example algal bloom on the Brittany coast was a similar example of a human-induced algal bloom. 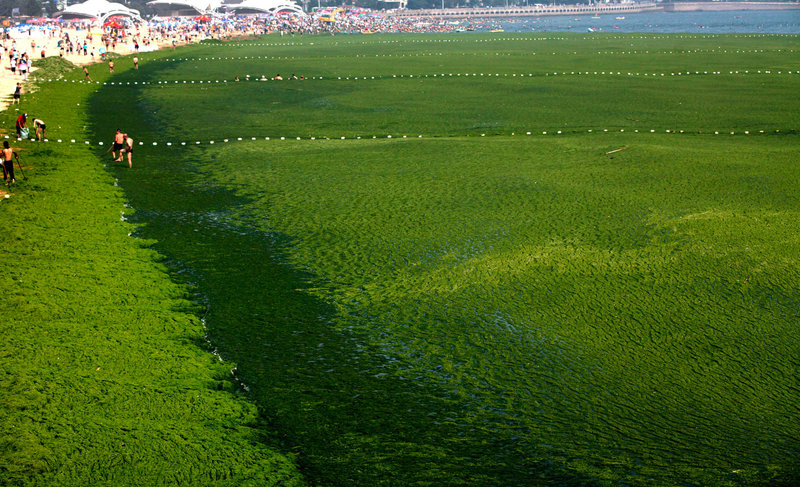