This article appeared originally in the Pure Water Occasional for October, 2010.

A little understood fact about granular carbon—any carbon used in filters, as a matter of fact—is that it contains a lot of air. What appears to be a pile of dry granules is actually the hiding place for countless tiny pockets of air. According to an article in Water Quality Products Magazine: “In a typical bed of dry activated carbon, the carbon skeleton only occupies 20 percent of the bed. The remainder is air.”

About half the trapped air is in the voids between the granules of the carbon. The other half is in the pores of the granules. Carbon granules are shot full of acres of many tiny crevices. These nooks and crannies are the very thing that gives carbon so much surface area and makes it such an effective adsorbent. A carbon particle only around 0.1 mm wide has a surface area of several square metres. In more dramatic terms, an EPA document states that GAC has an adsorption surface area from around 73 to 112 acres per pound!

Owners of even small carbon filters know that when water encounters carbon for the first time a lot of hissing and spluttering occurs. This is the sound of trapped air that is escaping from within the carbon. 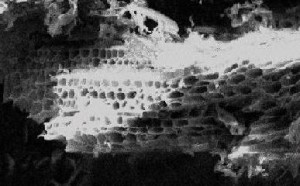 Enlargement of granular carbon shows countless pores that adsorb contaminants. The surface area of the pores is exceptional. A single pound of activated carbon has more surface area in its pores than 100 football fields. When the carbon is new, these pores are filled with air that must eventually work its way out.

In small filters, when water enters the new filter bed for the first time, the air that is displaced works itself out naturally in time. Other than give the new carbon a thorough rinse, nothing needs to be done to speed the process up. Air can be recognized in the product water of new carbon filters by the cloudiness it produces. Draw a glass of water from a new carbon filter. If the water is cloudy, watch it clear. If the cause of the cloudiness is air, the milky color will clear from the bottom upward. Often, after the water clears, what appears to be scum will be left on the top surface of the water. This is air trapped by the water’s “skin” or surface tension at the top of the glass. It’s of no concern.

In larger carbon beds used in tank-style filters it is often advantageous to allow a long soak—from overnight to several days, depending on the bed size and water temperature. This is because large air pockets can make the filter perform poorly. The filter, in fact, will not perform normally until all the air is gone. In some very large systems technicians resort to introducing heated water to speed the process up. This isn’t recommended for homeowners.In small filters, trapped air is often just an an aesthetic inconvenience, but it can sometimes cause “vapor locks” in undersink filters and reverse osmosis units. This condition can be relieved by simply opening a filter canister to allow the trapped air to escape. In RO units, most prefilter air escapes through the drain line of the membrane housing (that’s the hissing you hear when you start a new or a newly-serviced unit), and most postfilter air is expelled through the faucet. Rinsing the unit well usually gets rid of excess air quickly.

A vigorous backwash of up to 30 or 40 minutes can serve three purposes in new backwashing filters: it rids the carbon of fines (carbon dust), it resettles the bed so that smaller granules work their way to the top, and it clears out air pockets.

The best policy for starting non-backwashing In/Out-type filters is probably a very long soak before the unit goes into service. It could take up to 48 hours to get all the air out at ambient temperature, but the longer soak you can give the carbon before putting the filter in service the less air you’ll get into your home’s water pipes. Always open a downstream faucet to allow air to escape.

FYI: in industrial applications, air-release time can be cut to 3 to 4 hours by using 212 degree F. water. At 1800 degrees, air expulsion is instantaneous.