Aeration: An Effective Treatment for Some Serious Well Water Problems

Iron and hydrogen sulfide (H2S) are common well problems that frequently occur together and often lend themselves to similar treatment. Iron corrodes appliances, ruins clothing in laundry, stops up pipes, discolors fixtures; hydrogen sulfide, or rotten egg odor, makes water unpalatable and unpleasant, blackens plumbing fixtures, and can be a health hazard when severe. Where there is iron, there is often manganese, which in very small amounts can cause black staining and odors.

A variety of filters are used to remove oxidized contaminants, but here we are concerned only with the first step, oxidation.

The old-standby oxidizers for years have been chemicals like chlorine and potassium permanganate. Ozone and hydrogen peroxide are more natural oxidizers that are gaining in popularity. Another common oxidizer that is being used with ever greater frequency is air.

Plain air is a powerful oxidizer of iron, manganese, hydrogen sulfide. It has a variety of advantages, including its low cost and its easy availability. Air adds nothing objectionable to water and leaves no undesirable by-products. Air is in plentiful supply and does not have to be transported to the treatment site.

Air can be applied to water treatment in a variety of ways. We’re going to look at the most popular applications here.

Air stripping is a technique in which volatile organic compounds (VOCs) are transferred from water to air. Typically, air stripping takes place in a packed tower (known as an air stripper) or an aeration tank.

Traditional air strippers vary in height, and the height is correlated to the chemical concentration of the contaminated water. A recent innovation in air strippers is the low-profile air stripper. These units have a number of trays that are set almost horizontally. Water is cascaded over the trays to maximize air-water contact while minimizing vertical space. Because they are not so visible, they are increasingly being used for groundwater treatment.

Strippers are used most often to rid water of volatile organics (VOCs) and gasses like methane and radon. Methane and radon are often “aerated” by simply allowing the water to stand in an open tank.

For residential treatment of iron, manganese, and hydrogen sulfide, compact closed-tank aeration units are used. Below are some examples.

The simplest of the closed-tank systems is a passive aeration system that requires no outside power. It pulls air into the water line by means of an induction device called a Venturi. The Venturi (sometimes called a “Micronizer” or an educer) is installed in the water line prior to the well’s pressure tank. As water is forced through the venturi while the pressure tank is filling, air is sucked into the water line. The aerated water then enters a small treatment tank where the air is mixed thoroughly with the water and excess air is vented to the atmosphere. The water then passes to a filter, which removes the oxidized contaminants.

The main advantages of the Venturi system are its low cost, its economy of operation, and its simplicity. The main disadvantage is that the Venturi valve itself restricts water flow considerably. The Venturi works by funneling the entire water stream through a very small hole inside the valve in order to create the pressure differential required to pull air into the water line. This restricts water flow and often makes it difficult to size the filters which follow the unit, since iron filters often require significant backwash volume. Consequently, Venturi systems are most often sold as “one size fits all” units that use a standard 8″ X 44″ aeration tank, relatively easy to backwash filter media, and filter tanks no larger than 10″ X 54″.

A more aggressive approach to aeration, the air pump system uses a small compressor to pack air into a special aeration tank. This system normally has much more air turnover and therefore requires a more complex venting system than the Venturi system. 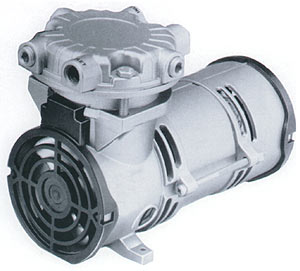 A typical air pump setup does not restrict water flow (as does the Venturi system), but it uses a small amount of electricity to run the pump and power the solenoid vent valve. Its initial cost is more than the Venturi system. It is a reliable system and little upkeep is normally needed. Any system, it should be noted, that treats iron needs upkeep because of problems caused by the formation of iron deposits within the system itself. Air pump units are no exception.

The strength of the air pump system is that air is a very rapid oxidizer, so much less retention time is needed as compared with chlorine. Normally, the aeration tank itself provides plenty of holding time for air to do its work. And larger air tanks can be used if more contact time is needed.

Yet another style of aerator that has been around for some time is the one- tank system in which aeration and filtration take place in a single tank. This style is usually marketed as single package without options.

The single tank unit maintains an air pocket in the top of the tank. As the service water passes through the air pocket, iron and H2S are oxidized and the oxidized contaminant is then caught by the filter in the bottom portion of the tank. Air is introduced by venturi draw, but not by an added venturi unit as with the simpler system above. In this type, the unit is controlled by a modified water softener valve which is made to draw air into the tank during the “brine draw” phase of its regeneration cycle.

With this type system manufacturers usually claim effectiveness against six to eight ppm of hydrogen sulfide and 8 or so parts per million iron. Different media are used in the tank depending upon if iron or hydrogen sulfide is the main targeted contaminant.

Single tank systems are relatively expensive because of the sophisticated control head, and they lack versatility. However, they can provide excellent, trouble-free service, and installation is simple.

We’ve been selling aeration devices since the early 1990s. We currently feature our slightly modified version of a national brand called AerMax. It’s a closed tank system with a small air pump. We stock complete systems, accompanying filters, and all parts. We also offer optional add-ons to the AerMax like the flow switches and a “double aeration” feature for enhanced treatment of hydrogen sulfide.

We have an air pump parts page, offer repair kits and even some reconditioned air pumps. We stock the less expensive Venturi systems and parts, although we don’t have them on our main website.

In the twenty years we’ve sold aeration devices, we’ve never marketed them as “green” products. When you think of it, though, what could be “greener” than a treatment system that uses a renewable resource, requires only minimal energy, keeps chemicals like chlorine and potassium permanganate out the environment, and has no negative environmental impact at the point of use?

More about aeration from the Pure Water Products website.

Please sign up for our email newsletter, the prize-winning Pure Water Occasional.