According to the Wikipedia,  “Adsorption is the adhesion of atoms, ions, or molecules from a gas, liquid, or dissolved solid to a surface.  This process creates a film of the adsorbate on the surface of the adsorbent. This process differs from absorption, in which a fluid (the absorbate) permeates or is dissolved by a liquid or solid (the absorbent).  Note that adsorption is a surface-based process while absorption involves the whole volume of the material.” 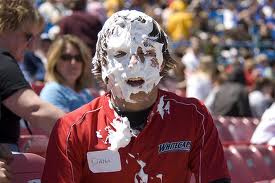 This man has adsorbed a pie. 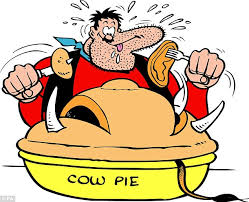 This man is absorbing a pie.

In water treatment, activated carbon is the main adsorbing agent.  This is true because filter carbon has an amazing amount of surface area and a strong ability to attract and hold organic chemicals.  Most of the surface area is internal. 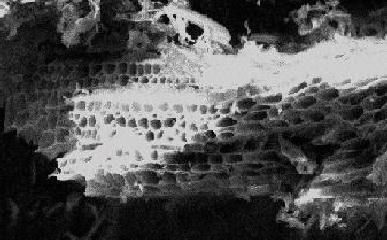 Enlargement of granular carbon shows countless pores that adsorb contaminants. The surface area of the pores is exceptional. A single pound of activated carbon has more surface area in its pores than 100 football fields.

Carbon’s amazing ability to adsorb organic chemicals varies according to the chemical in question and conditions of the water. In general, chemicals of high molecular weight and low solubility are most easily adsorbed.  The lower the concentration of the chemical, the higher the adsorption rate by carbon.  Also, the fewer the interfering organic compounds present in the water the better.  The pH of the water is also significant, with acidic compounds being most readily adsorbed at low pH.  And, as with most other aspects of water filtration, rate of flow of the water being treated is extremely important with carbon adsorption. The more residence time the better.

In regard to specific chemicals, one source lists dozens of common chemicals and ranks them according to the likelihood that they will be removed by carbon adsorption.  Here are a few of the more common items from the list:

Unlikely to be adsorbed by carbon:  Isopropyl alcohol, dimethylformaldehyde, propylene.

It should be remembered that although carbon has great chemical reduction capacity because of its ability to attract and hold chemicals on its surface,  it acts in other ways as well.  Chlorine, for example, is reduced mainly by catalytic reaction with the carbon, not by the “grab and hold” process of adsorption.